Trending
You are at:Home»General»Peeing in Our Tanks to Jump Start the Cycle 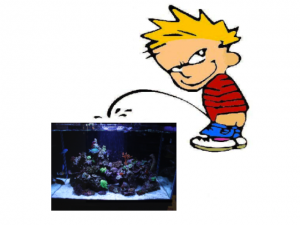 I came across a very interesting thread on one of the forums discussing the act of urinating in a newly set up marine aquarium in an attempt to jump start the nitrogen cycle. The basic premise behind the theory is that ammonia in the urine won’t have to come from decaying organic matter typically found on live rock, but will instead come directly from the pee. Long story short, the bacteria will consume the ammonia in the urine, converting it to nitrite, and then on to nitrate, thus completing the cycle. It’s a radical idea to some, but apparently it’s been in use in discus aquariums for quite a long time.

I’m not advocating using this technique, an opinion shared by several of those who commented, but I do find the technique to be intriguing. Several people suggested that by using urine, the tank cycle would actually be prolonged due to the intense amount of ammonia being introduced. Others claimed that phosphates and other chemicals found in the urine would get absorbed into the live rock, presenting problems down the road. An alternative solution presented by a few of the hobbyists was to add bottled ammonia to the aquarium instead. While this would serve as a purer source of ammonia, potential side effects could occur with this route as well.

I’m more for taking a natural approach, but with the increased use of dried rocks which are basically devoid of any life, using a less conventional method might be more ideal. Of course, with this being well off the beaten path, there are probably many drawbacks to this method that have yet to be discovered.