Trending
You are at:Home»Reef Conservation»Study Shows How to Grow Corals Faster 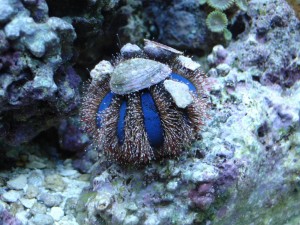 The Wildlife Conservation Society, in conjunction with the University of California at Santa Cruz, conducted an 18-year study of Kenya’s coral reefs and found that reef systems with more sea urchins have slower reef growth rates. In heavily fish areas, sea urchin predators are lacking. Because of this, urchin populations are left unchecked and coralline algae, a major food source for urchins, in the area is depleted. This is bad news for corals, as coralline algae contributes to the growth of huge flat reefs. The study also found that reef systems that were closed to fishing, and therefore fewer sea urchins due to predation, showed higher reef growth rates. The study didn’t only focus on predatory fish, as herbivorous fish were also examined. Not surprisingly, algae eating fish like surgeonfish (tangs) had a significant impact on coralline algae. The herbivores removed fleshy algae that competes with coralline, allowing for more reef building algae to accumulate.

Getting back on topic with the urchins, the results of this study are remarkably different than what occurred in the Caribbean in the 1980s. In the early 80’s, the Diadema sea urchins of the Caribbean experienced a massive die off. It was reported that 97% of Diadema urchins died because of disease. Because of this, turf algae basically went nuts, severely choking back existing corals and preventing coral larvae from settling.

Regardless of the locale, it has been proven time and time again that even the seemingly least significant of creatures can have a huge impact on an entire ecosystem.

For a little more information on this study, please visit X-Ray Mag.