Trending
You are at:Home»General»TFH Covering More Freshwater Topics than Saltwater 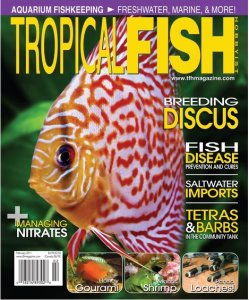 I’ve been a subscriber of Tropical Fish Hobbyist magazine on and off for quite some time now. I would buy a magazine from the local bookstores from time to time, and a subscription eventually took over. I would often thumb through the articles, reading those that were related to saltwater and usually skipping the freshwater stuff. But over the last several months, I’ve found myself to be spending less time on the magazine. I just assumed there wasn’t many magazine-worthy saltwater topics to write about, but the decreasing number of saltwater articles is really getting me to rethink my subscription. In the latest issue of TFH, the February 2011 issue, there are approximately 23 articles of varying lengths. Of these articles, 17 are freshwater! They cover planted tanks, freshwater Q&A, multiple cichlid topics, and stuff on discus. One of the articles in the mag were even about triops…yes, triops.

I’m not sure why the saltwater portion of the hobby isn’t being covered to the same extent as freshwater, but I would certainly welcome a change. TFH has been a great magazine for years, and I’m not saying that it is declining, but my interest in the topics certainly is. Freshwater tanks simply do not fascinate me to the extent marine tanks do. Hopefully the next few issues will start including more saltwater topics.