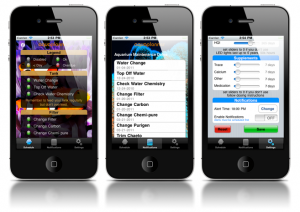 We were recently given access to a nifty new aquarium related iPhone application for a product review. The aquaPlanner app is a maintenance scheduling software that reminds you when certain tasks are coming up and when others are about to expire or are overdue. The app is easy to use and is currently available to download from the Apple iTunes App store for only $2.99.

The app is very easy to use. You fire it right up and can get to work. Scheduling tasks is a breeze since everything is adjusted via sliders, which has become very common among smart phones. When I first started using the aquaPlanner app, my fingers kept getting in the way of the numbers as I adjusted the sliders. It was a little frustrating, but to circumvent this pesky FFS (Fat Finger Syndrome), the app has convenient “+” and “-” signs that appear above the slider when it is activated. These signs also provide better fine tuning of the numbers, as the sliders seem to be more for quick adjustments.

Another great feature is customizable tasks. This app’s designer obviously had enough foresight to understand that not every tank is the same and not every hobbyists performs the same tasks. Up to four custom tasks can be created and they can be whatever you want them to be. Further adding to the app’s appeal is list of upcoming notifications, some being several months in the future. These serve as constant reminders of approaching tasks

Keep reading below for the areas where we thought the app could improve, as well as our official verdict. 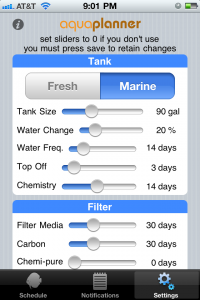 There was really only a few things that we feel needed improvement. The first is how the aquaPlanner distinguishes between fresh and saltwater aquariums. Even though switching between the two is very simple, there is no difference in the scheduled tasks. When you switch to freshwater, items like “Chaeto Trim”, “Ref. Light”, and “Skimmer” still show up. Obviously freshwater aquariums don’t have Chaetomorpha, refugiums, or protein skimmers, so these should vanish when you make the switch. Additionally, there’s nothing new that shows up when you switch from saltwater to freshwater. Fortunately, the app user has an area for customized tasks, so adding more tasks for freshwater or saltwater isn’t impossible or difficult to do.

The second area for improvement is the limitation of the app to only one aquarium. Currently, the aquaPlanner can accommodate a single tank, either freshwater or saltwater. However, because many hobbyists have multiple aquariums, we feel the app should also be able to handle multiple tanks.

The last item to be improved is the number of customizable tasks. The app currently offers four, but if possible I would like to see that number be limitless. 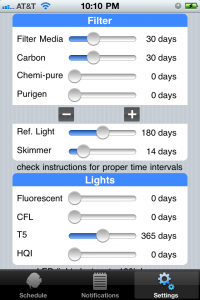 Neither Here Nor There:

One thing that would be nice, but doesn’t affect the functionality of the app at all, is the ability to change the app’s background. Currently, the app offers only one background…a gorgeous clownfish pair swimming in an anemone. Allowing users to customize the background by uploading a photo might make the software more personable. It might serve to keep one focused on the activities if they constantly see a picture of their tank behind all of the reminders. Sort of like a “this is what it takes to look this good” reminder.

Overall, the aquaPlanner is a great piece of software for those who like to keep up to date with their aquarium maintenance. It is especially nice for those who have a difficult time remembering when to perform certain tasks. I would certainly recommend this app to other aquarium hobbyists with smart phones, and hopefully future updates will expand the app’s functionality.