Trending
You are at:Home»Aquarium Livestock»Update on the NSW Marshall Islands Reef Tank 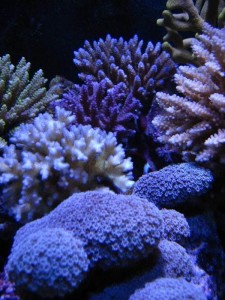 Several months ago, we showed off the beautiful natural seawater reef aquarium of our friend Chuck, who recently relocated to the Marshall Islands for a dream job. Since we first showed off the tank, things have grown in nicely and Chuck has added to it quite a bit, so we figured an update was due. The tank has been set up for approximately 5 months now. On the occasion, a coral colony or two might get put back into the ocean and swapped for something better looking, smaller, or just more interesting. I do not recommend doing this for tanks here in the states, as the corals are all imported from far away places. But because all of the corals, fish, and even the water in Chuck’s tank are taken from his backyard basically, he can do this without running the risk of introducing a non-native species.