Trending
You are at:Home»General»Massive Fish Kill in California Blamed on Lack of Oxygen 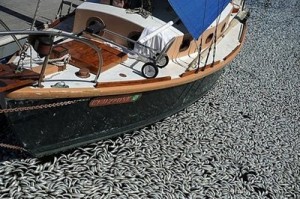 Surely by now you’ve heard about the massive fish kill that recently took place in a southern California harbor. But in case you haven’t been following the news, here’s a quick rundown of what took place. On March 7th, the King Harbor in Redondo Beach, California began to fill up with dead anchovies, sardines, mackerel, and other fish. Initial assumptions were that the oxygen in the water was depleted, but no reason for the depletion could be determined. Red tides were blamed, but none of the tell-tale signs of such a bacterial bloom were present. The water wasn’t discolored and there wasn’t any foam on the water’s surface. Some experts also assume that the fish were chased or scared into the harbor, where oxygen levels were quickly depleted by the aspirating fish. And once the fish started to die, bacteria in the water started to take over, further depleting O2 levels.

Regardless of the scenario, millions of fish are belly up in the southern Californian harbor. Estimates of the cleanup have gone well past $100K, with the economical impact of losing such a large amount of fish climbing into the millions. For more images of the crisis, please visit Yahoo.