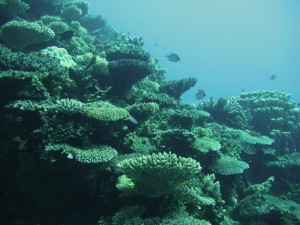 Researchers at the Taronga Zoo, Monash University and the Australian Institute of Marine Science recently teamed up and announced that they will be collecting and preserving coral polyps with the use of cryogenics. The project, which is similar to the Svalbard Global Seed Vault (aka Doomsday Vault), has the goal of freezing coral polyps as a way to prevent the species from which they are collected from going extinct, as well as serve as a means to restore local coral populations in the event a natural or man made disaster wipes out part of the Great Barrier Reef, obviously the spot where a majority of the coral polyps will be collected. The zoo already houses the reproductive materials taken from over 300 species of animals, but this will be the first time their efforts have been focused on corals.

Once collected, the coral polyps and other material will be frozen at -296 degrees Fahrenheit. At this temperature, organic molecules are prevented from breaking down. This temperature will be achieved with the use of liquid nitrogen and loads of special equipment, and the researchers hope to get other organizations involved to collect other coral species globally.