Trending
You are at:Home»Reef Conservation»2000 Year Old Coral Discoverd in Gulf of Mexico 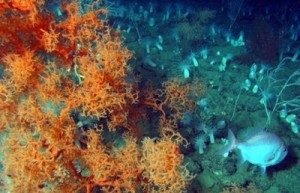 According to a recent AP article, federal scientists revealed their discovery of corals living near the infamous BP oil well that were dated and found to be over 2,000 years old. The discovery of these corals isn’t without its issues, as there is a big concern about the extent to which they were damaged by the oil spill, which is nearing its one-year anniversary. Dead corals have been found all around the oil spill site, and the assessment is currently ongoing.

The black coral is an “ancient slow-growing coral” that was found approximately 21 miles northeast of the BP oil spill origin and 1,000 feet below the surface of the Gulf of Mexico. They resemble deep-sea bushes and grow 2000 times slower than a human fingernail. Contrary to their name, black corals aren’t actually black. Instead, they can be a vibrant orange color. Living at such an extreme depth, the black corals do not possess the typical nutrient providing Zooxanthellae that shallow water corals have. Instead, they rely on organic matter sinking to the sea floor.