Trending
You are at:Home»Reef Conservation»Training Sharks to Eat Invasive Lionfish 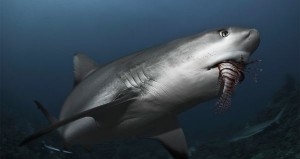 According to a recent National Geographic article, sharks in the Roatan Marine Park are being taught to eat lionfish. The marine park, located just 50 kilometers from Honduras in the Caribbean Sea, has been invaded by the infamous lionfish over the last several years and local divers are sick of it. Their solution, teach local sharks and the occasional passer-by to associate the non-native and ever growing population of lionfish as a food source. The divers are feeding dead fish to the sharks, which may not actually be teaching them to hunt the fish. Instead, because sharks are looking for a cheap meal (from an energy expenditure standpoint), they aren’t learning anything other than humans are offering free food. Additionally, sharks may not hunt the lionfish when they encounter them away from humans, simply because other food sources may be easier to attain. Let’s face it, a live lionfish isn’t exactly the easiest thing to catch and eat, with it’s long venomous spines and all.

Despite this, we still support any effort to rid the Atlantic and Caribbean of any non-native organisms. Let’s hope that at some point the sharks do develop a taste for lionfish and decide to hunt them in the wild.