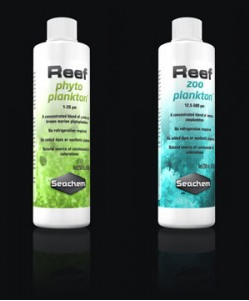 It’s been awhile since Seachem has had a suspension food on the market, and with all the others out there, they had some catching up to do. In late February, they introduced a line comprising of two foods that would feed any and all corals between them. They introduced Phyto Plankton and Zoo Plankton. With all the catching up to do, they had a little extra to prove, so they started by including in the two foods every size particulate needed to feed all coral types. They also chemically weakened the outer flesh of the particles which requires less energy from corals for digestion than conventional food. Their phyto is from 1-20 pm and their zoo plankton is between 12.5-500 pm in size, giving a nice broad range. If that wasn’t enough, they really knocked them out of the park by keeping them refrigeration free!

I received a 250ml. bottle of each from the Seachem rep. and have not looked back since. I haven’t noticed an increase in coral growth yet, and most likely won’t because my reef has been fed well since day one, but I can’t stress enough how much I love not having to journey to the fridge to get food. Feeding daily is now that much easier and happens that much more often. Stay tuned to further results that might come to bear with the new food.