Trending
You are at:Home»General»Cookie-Cutter Shark Takes Bite Out of Swimmer 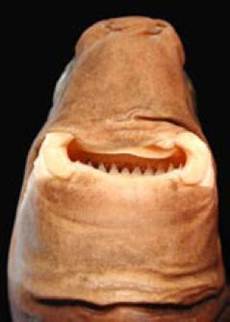 Shark attacks happen far too often among swimmers, surfers, and spear fishermen, but the usual culprits are bull sharks or some other species that frequent beaches and other populated areas. In a bizarre story out of Hawaii, a swimmer was attacked, but not by the typical sharks. Instead, it was a cookie-cutter shark that decided to snack on the swimmer. The incident is actually a couple of years old now, but recent stories state that the long-distance swimmer was trying to cross a channel during a 30-mile swim at night. The primarily nocturnal shark took a bite out of the swimmer’s chest and calf, making this unusual attack the first ever documented case of a cookie-cutter shark attack on a human.

Cookie-cutter sharks get their name from the shape of the bite wounds left on their victims, which are often fish and whales. Their unusual teeth gouge out a large chunk of flesh, leaving behind a gaping wound. The shark rarely kills it’s target, but the injuries can be severe enough that they could cause massive blood loss. In the case of this diver, death never occurred. However, extensive plastic surgery was needed to fix the wounds.

Another aspect of the cookie-cutter shark’s lifestyle that makes contact with a human extremely rare, other than it’s nocturnal feeding activities, is the fact that these fish inhabit the open tropical ocean. Swimmers and surfers obviously swim near beaches and in shallow waters, but this isn’t the case for the long-distance swimmer that was attacked obviously. These sharks usually hangs out among squid at night, making use of bioluminescence to fit into the crowd. When large predators approach, the shark darts out of the squid and takes a chunk of flesh before quickly returning to the depths. Besides stealth, their massive teeth aid in their slash and grab hunting style. Cookie-cutters have the largest teeth of any shark in relation to the size of their jaws, allowing them to maximize their short time with their victims.