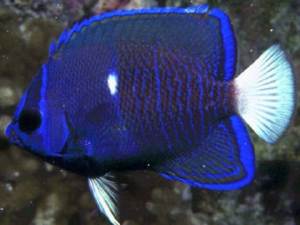 According to CBS San Francisco, Cortez Marine fish collector Steve Robinson recently plead guilty to illegally collecting the very rare Clipperton angelfish (Holacanthus limbaughi) from the only place they are found in the world, the Clipperton Islands. Authorities stated that Robinson collected 52 of these rare angelfish during a four-day excursion to the French owned Clipperton Atoll back in 2009 and attempted to smuggle the fish into the US through Mexico. Additionally, after the fish were caught, they were then relabeled as the more common blue passer angelfish (Holacanthus passer) in order to deceive customs officials stateside and hide their value.

Why did Steve try to sneak these fish past customs? For starters, the fish are quite rare. So rare in fact that they have commanded a $10,000 price tag in the past. The other reason for the deception is permitting. Part of the problem that Robinson faces is the fact that the Clipperton Atoll belongs to France, who requires collectors to have a specific permit to collect the Clipperton angelfish. Robinson obviously did not have this special permit, and because he collected the fish illegally, he faces a maximum penalty of one year in prison, a fine of $100,000 and another year of supervised release.

The fine doesn’t make a whole lot of sense to me, considering the combined cost of the fish exceeds $500,000. We also doubt that Robinson will face any real jail time seeing as how the prisons in California are already packed like cans of sardines. Regardless of our speculation, we’ll all hear about it in a very short time, as Robinson is scheduled on November 3oth in San Francisco.