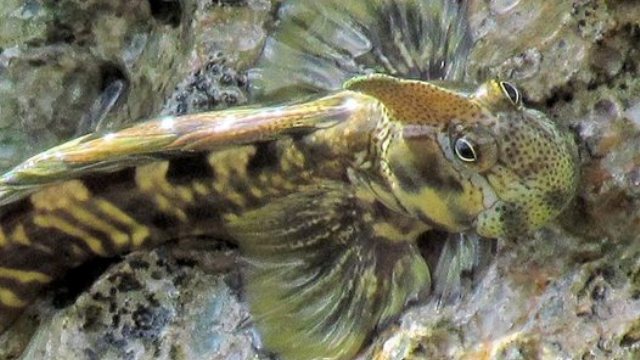 Most stories on the origin of life claim that living organisms first appeared in the oceans, eventually moving onto land as environmental pressures pushed life out of the seas and swamplands and into the harsh new dry world. This theory is supported through the fossil record over and over again, but it would appear that we might actually be witnessing it in real time. We stumbled across this interesting marine fish on io9, and it is one that spends almost its entire adult life on land. The Pacific Leaping Blenny (Alticus arnoldorum) hails from Guam and, according to researchers, never voluntarily returns to the water. Instead, the fish was seen actively avoiding incoming waves even when the scientists tried to capture them for study. The fish would attempt to flee by using a tail-twisting escape method or even jumping, choosing to move farther inland than any normal fish out of water. The blenny can apparently navigate rough and complex terrain with both ease and speed, making it quite difficult to capture. The fish does have to remain moist in order to breathe through its gills though, which means it has to take a dunk every once in a while, but the rest of the day it spends on land foraging for food, with males spending most of their time defending territories and displaying to females.