Trending
You are at:Home»Reef Conservation»A Call to Enact a Ban on Reef Tourism 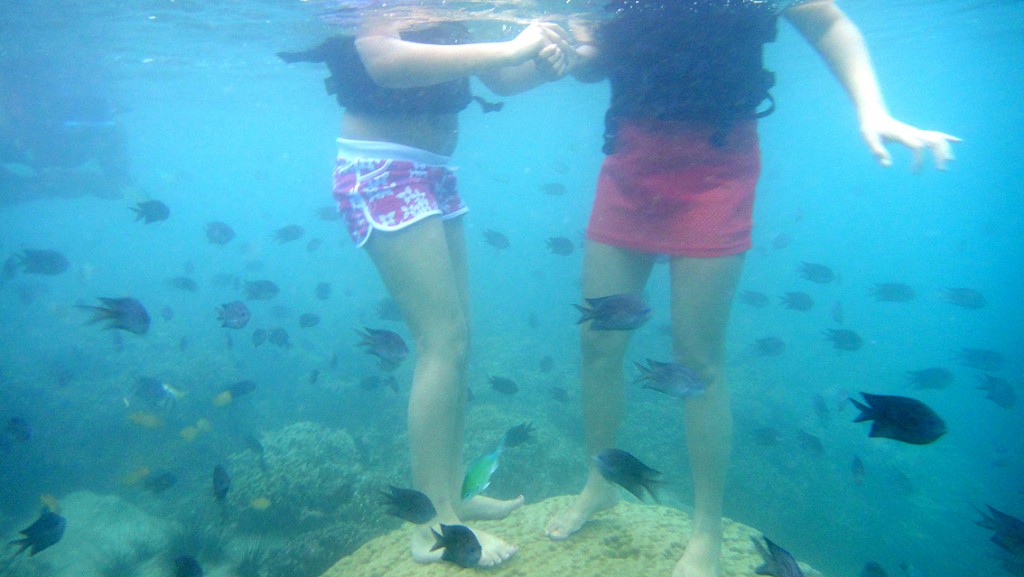 Snorkelers Standing on Coral Head in the Philippines, Copyright Voice21

With all of the rhetoric surrounding the potential banning of the aquarium trade in Hawaii, we’ve decided that the conservationists backing any form of anti-aquarium legislation need to not only focus on one industry, but every industry that has roots in the ocean. The tourism industry, for example, is one of the largest perpetrators of reef destruction, which comes in a variety of forms like coral reef damage, pollution and runoff from the development of the tourist infrastructure, and the atrocious shell and curio trade to name a few. Snorkelers lather up with sunscreen and hop into the ocean to fondle sea turtles, stand on corals while they adjust their foggy dive masks, and dump all sorts of garbage into the water. On land, continual development of beaches and boating lanes stirs up sediment and releases untold amounts of algae-fueling nutrients into the water, and those not courageous enough to venture into the water don’t mind buying up shell necklaces and ocean-based home decor. And they want to point the finger at the aquarium trade, which is an industry that makes the extra effort to promote conservation around every turn? They want to blame the collectors for decimating their fish populations? I say lets ban the tourism industry, and while we’re at it, let’s go after recreational fishing and any sort of coastal development. And since groups like For the Fishes want to toss around undocumented statistics in all of their articles, here’s one of our own: 98.7% of all corals and invertebrates that a diver encounters on the reef die within a week of that encounter. Pulling random information out of our butts in order to elicit an emotional response is fun isn’t it?

The aquarium industry in Hawaii should be viewed as a fishery and nothing more. For that reason alone, it can be regulated in a very sustainable way. In fact, current regulations have proven to be quite helpful to the different fish populations of Hawaii. For example, yellow tang numbers are on the rise, but the conservationists of the state don’t like to go by statistical data that has a source. They want to see an outright ban on the hobby, which is not necessary by any means.

From the Hawaii DAR…

THIS IS EXACTLY HOW MANAGEMENT IS SUPPOSED TO WORK. In 2000, the state started aggressively managing yellow tang, the prize fish of the aquarium trade in Hawaii. It was a move that came on the heels of community concern that the fish were being overharvested.

Over ten years of managing aquarium collection like a fishery and it has shown to increase tang populations. Sounds like a sustainable practice to me. The report proves our point that that total bans are not required for sustainable collection and that the aquarium industry isn’t raping the reefs like they would have you believe.

Back to the tourism industry. If you think that divers and boaters don’t damage the coral reefs, then you are incredibly naive. The aquarium hobby does have irresponsible pet owners, but the tourism industry is full of irresponsible individuals too. And with millions of visitors to Hawaiian reefs each year, the effects can be far reaching. People stand on coral reefs constantly, and they could care less. The photograph at the top of this article is proof of such irresponsible actions, and the text associated with that photo is even more disturbing…

I was ready to go out, I was excited. I saw loads of fish, even Dory from Finding Nemo. They would just come up to your hand and eat the bread, the corals were huge! We stood on one, but the current kept pushing me and I couldn’t keep my balance, then I felt something on my toe. I got stung by a sea urchin. I don’t think I’ve ever felt my toe so much; it was like a headache in my toe. Everyone laughs when I say that but I can’t explain it any other way. Then I kicked the coral, I had no idea how bad it was until I got on the boat. One foot was cut and the other had a sea urchin spike in it! My feet had so many scars from this holiday.

How sustainable does this practice sound Snorkel Bob? Would you like to jump on the anti-tourism bandwagon too? Doubtful since you sell snorkel gear and operate dives in Hawaii all of the time. Perhaps you should look at your industry before you go attacking others.

Want some more proof on how badly the tourism industry affects coral reefs, read this interesting article by Practical Fishkeeping: Coral reefs are literally sick of ecotourists, according to a study published in the most recent issue of the journal Conservation Biology. Here’s a brief excerpt from that article:

The authors compared prevalence of brown band disease, white syndromes, black band disease, skeletal eroding band, and growth anomalies among reefs with and without permanent tourism platforms within the Great Barrier Reef Marine Park. Basing their study on eight reef sites (four with platforms and four without), the authors visually surveyed the corals for signs of disease using belt transects.

When their results were analysed, the authors found that coral diseases were 15 times more prevalent at reefs with offshore tourism platforms than at nearby reefs without platforms.

In a nutshell, the mere presence of divers in the water caused harm and they weren’t even standing on the corals. Image how much more damaging it is when you have idiots walking on corals and kicking them, as the individual from the photograph above clearly stated. Tourism has a huge negative impact on reef health and for that reason, it should be banned.