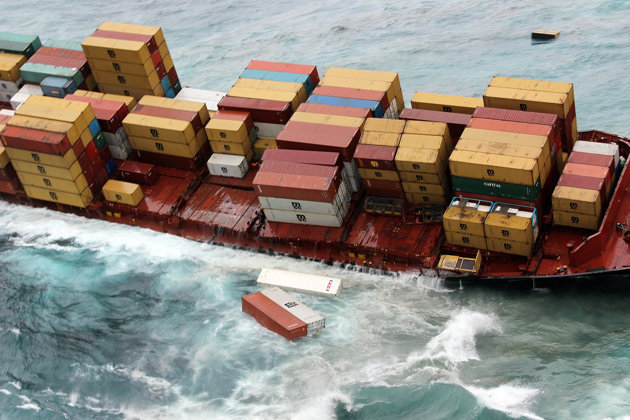 According to a recent AP story published on Yahoo, a huge cargo ship has run aground on the Astrolabe Reef just off the coast of New Zealand. The ship, which ran aground on October 5th, has already spilled hundreds of tons of oil onto the reef and is very close to breaking apart. A huge vertical crack runs from the deck of the ship all the way down below the waterline and about 70 containers have fallen off the deck into the surrounding oceans. According to Maritime New Zealand, the group overseeing the response to this incident, warns that the stern could break away at anytime, but has also stated that three tugboats have been stationed on the wreck to hold it in place while the oil is removed from the ship and possibly move the ship to shallower waters. To make the situation even worse, weather on the reef has been terrible, as large swells pummel the ship regularly. These waves prevent the salvage crew from boarding the ship, which also means the oil can’t be removed. Fortunately, the weather is expected to calm down today, allowing the ship to be boarded. Additionally, six boats will be retrieving the cargo containers and other wreckage scattered about and drifting in the water. The containers that were thrown into the ocean are not expected to contain any hazardous material. As for the ship’s captain, he has been charged with “operating a vessel in a manner causing unnecessary danger or risk” and has been released on bail through the Tauranga District Court. The maximum penalty the captain is facing is a total of 10,000 New Zealand dollars ($7,800) and up 12 months in prison. For obvious reasons, we feel this punishment is nowhere near enough, especially given the fact that this wreck has spilled an untold amount of oil onto a reef.

There’s a great video of the shipwreck over on the Yahoo story (link at the beginning of this article).