Trending
You are at:Home»Aquarium Equipment»Tunze Updates Pump Lineup with New 6155 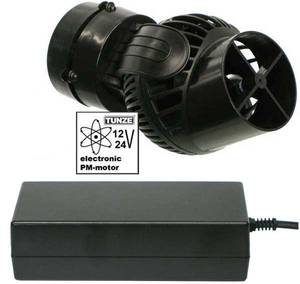 Tunze is continually finding ways to update their product line and provide valuable improvements to pump performance. This is evident with their approach to improving the flow numbers after the now infamous flow study came out, and once again with the release of their new 6155 Stream pump. The new Tunze 6155 is actually designed to be a replacement for the 6205 Stream 2 pumps, but adopts technology seen in the 6305 to provide better water flow. These features include a pump housing that has wider outlet and a grill that is more widely spaced apart, both of which allow for more water to be sucked in and expelled. A new impeller design is also being put into place. The impeller shaft is going to be fixed, which will help reduce vibrational noise, and the longer impeller increases water flow. The 6155 water pump is controllable and has an adjustable flow rate of 4,000 to about 15,000 lph (or 1,057 to 3,963 gph). The energy consumption is almost identical to that of the 6205 at a maximum of 54w, and the included magnet holder is capable of handling aquariums with glass up to an inch thick. The retail price is said to be around $550, which is another thing the 6155 shares with the 6205, and it is expected to be available sometime in November of this year.