With the looming release of the stylish new Unibody LED fixture, JBJ is also quietly unveiling a brand new rimless Nano-Cube. But this new nano isn’t just a rimless version of the aquariums that JBJ already offers. Instead, the nano builders went back to the drawing board and completely revamped the nano for this rimless tank. According to JBJ, the new Nano-Cube RL, as it is called, will come in three sizes which include a 5-gallon, 8-gallon, and a 30-gallon. Unlike all of the Nano-Cubes that came before it, this new rimless nano will not come with a stock lighting system. Instead, it will be sold separately in the form of the Unibody LED. While this move means that the aquarium isn’t fully functional right out of the box, it should make the tank itself a little cheaper and it opens up all sorts of lighting options for potential users.

In terms of features, the new Nano-Cube RL will have a centrally mounted internal overflow box that feeds a 3-stage media filter basket and a couple of additional chambers that can house additional equipment like the included dual return pumps. However, these features don’t seem to be universal across all three sizes of the rimless nanos, at least when looking at the digital renderings of the aquariums. For example, the 30-gallon aquarium doesn’t appear to have a singe, centrally mounted overflow. Instead, it has dual overflows located on the left and right side with the return pumps located in the middle chamber. 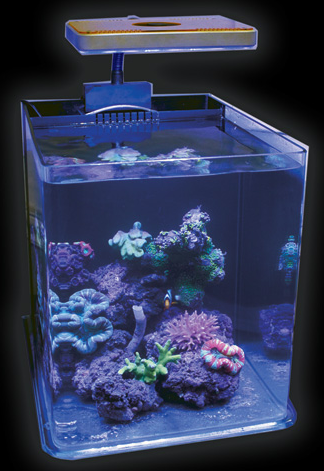 One thing that concerns us with the dual return pump setup is the fact that it may render the additional chambers useless to other functions. If the middle chamber is full with the media basket and has the gooseneck light fixture mount attached to it, then a nano-sized protein skimmer may not fit in this chamber. And because protein skimmers depend so heavily on a constant water level, the two chambers housing the return pumps wouldn’t work either. One could argue that with tank this small a protein skimmer may not have a big impact and that water changes would be far better. While this notion does have some merit, the skimmers do help out to some extent and aquarium hobbyists just love to beef up their all-in-one tanks anyways.

The price and availability of these new JBJ Nano-Cube RL aquariums hasn’t been released, but we’ll be keeping an eye on these tanks and update whenever more information surfaces.