Trending
You are at:Home»General»“Tanked” Promotional Literature is Full of Contradictions 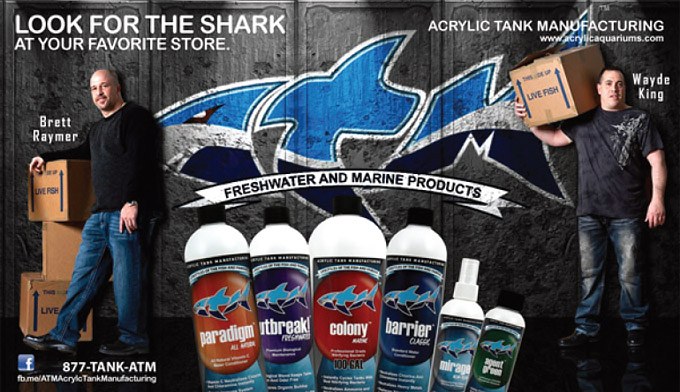 Most of us have seen an episode of “Tanked”, the television show that follows the aquarium builders at Acrylic Tank Manufacturing (or ATM) in their attempt to promote the hobby. While most of the advanced saltwater aquarium hobbyists have a negative opinion of the show, it has seen a good deal of success that has led to Animal Planet renewing them for a second season. Hoping to further cash in on the success of the show, the guys at ATM have “developed” a new line of aquarium additives which are supposed to be the very same products used by ATM in all of their fish burdened installations. We have discussed each of these additives in early November in an article titled “Acrylic Tank Manufacturing Unveils Their Miracle Additives, Mental Gymnastics Abound”, but the recent release of some promotional literature has prompted us to bring them up once again.

This promotional literature was intended to introduce the “Tanked” additives, or at least that’s the initial impression you get when opening up the PDF. However, the entire article is full of glaring contradictions that elicit an epic facepalm moment, and ATM continues on with their self-promoting attitude by claiming “everyone wins” due to their show. There’s literally nothing about the actual products other than why you should use them and who else uses them (most of which are tanks that ATM built).

The giant contradiction is readily apparent when reading through the dribble. ATM apparently strives to inspire the next generation of aquarium keepers and promote “efficient ways of having new hobbyists succeed”. Both of these are a noble cause and things we try to do here at the AquaNerd Blog as well. Unfortunately, in the very next paragraph, ATM also claims that their show wasn’t designed to be a “television dissertation on the steps of setting up an aquarium”. This is where we get confused. How do you inspire new hobbyists and try to promote hobbyist success, but at the same time claim that the show wasn’t designed to show people how to set up an aquarium? That makes zero sense.

As for the products themselves, they were obviously designed to get an aquarium up and running as fast as possible. For a commercial institution whose only goal is to build aquariums and maintain them for people, this sort of product might work. After all, they are on a short time frame and the customer wants to be happy. However, for those young aquarium keepers on a budget, shouldn’t they be taught how to do things the right way? Shouldn’t they be told to take their time, stock the aquarium lightly and gradually, and enjoy the process of building a setup instead of the instant gratification? If you truly wanted to inspire young hobbyists, why not tell them how to do it right? Instead, they get shown how to fill a tank with over a hundred fish and try to use some miracle chemical to keep the fish alive long enough to enjoy. Then when people get upset about the quick fish stocking and instant aquariums, the guys at ATM try to blame the fish stores for not teaching people how to do it properly.

It’s a shame that ATM didn’t develop an additive to cure foot in mouth disease.