Trending
You are at:Home»General»20 Tons of Dead Herring Found on Norwegian Coastline 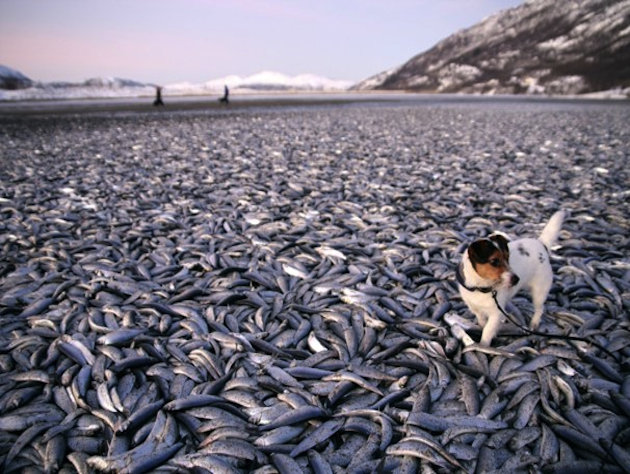 Massive die-offs in the animal world seem to be on the rise, or at the very least the media is doing a more thorough job of covering them. Regardless, over the past couple of years we’ve seen fish and birds dying off in great numbers in different parts of the world, and the latest massive fish loss comes from the coasts of Norway. According to a recent Yahoo! News story, an estimated 20 tons of herring were found dead along the northern coast of Norway on New Year’s Eve, and local authorities don’t have a clue as to how the fish died. Despite this, there’s a healthy amount of speculation going on, with many chalking up the deaths to a combinations of factors. These could include low oxygen levels, aggressive predation, or even a storm. To make sure no diseases caused the die-off, samples have been shipped off to labs, but those results could take days or even weeks to get back. Besides the why, the other major question at the time of the discovery was how to dispose of the fish. Fortunately, mother nature has taken care of that for them as the fish disappeared just about as quickly as they appeared in the first place. It is assumed that coastal waters simply washed the fish back out to sea, where they will likely become a feast for oceanic scavengers.