Trending
You are at:Home»Aquarium Livestock»Our First Rare Fish Spotting of the New Year 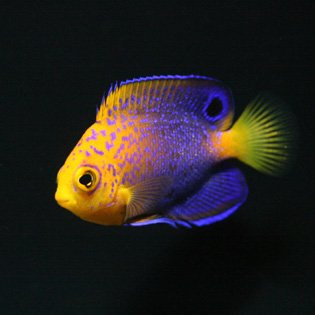 The year is still so young, but we’ve already got a rare fish sighting to report. Over the past couple of months, we’ve seen the Interruptus Angelfish (Centropyge interrupta) show up in only a couple of places. The first was a video clip from Blue Harbor in November. Then LiveAquaria posted a couple of these beautiful angels for sale in their Diver’s Den, which is one of the very few times these fish have ever been available in the US. Now, we see a brand new video from B-Box Aquarium (see below) that shows this stunning juvenile angel swimming around in an in-tank specimen container.

With the Interruptus angelfish being so rare, we’re curious as to how three different companies (Blue Harbor, LiveAquaria, and B-Box Aquarium) have each gotten their hands on one or more. Sure, five different individuals could have been caught by collectors, and probably even the same collector. Then we started to wonder if the fish seen at each of these places aren’t the same individuals. We realize this is a bit of a stretch, but it’s not unusual for vendors to buy from each other, especially if the fish are really rare and highly sought after. Blue Harbor first showed off their pair of angels in early November. Then LiveAquaria showed off their pair in December, one of which sold rather quickly. Well, it was removed from the Diver’s Den, so we assume it was sold. Now, B-Box Aquarium is showing off just one juvenile angelfish. Is it possible that this fish has flown from Japan to Wisconsin and back to Japan again? Again, we realize this is a bit of a stretch, but people have gone to more extreme lengths to get their prize fish before.