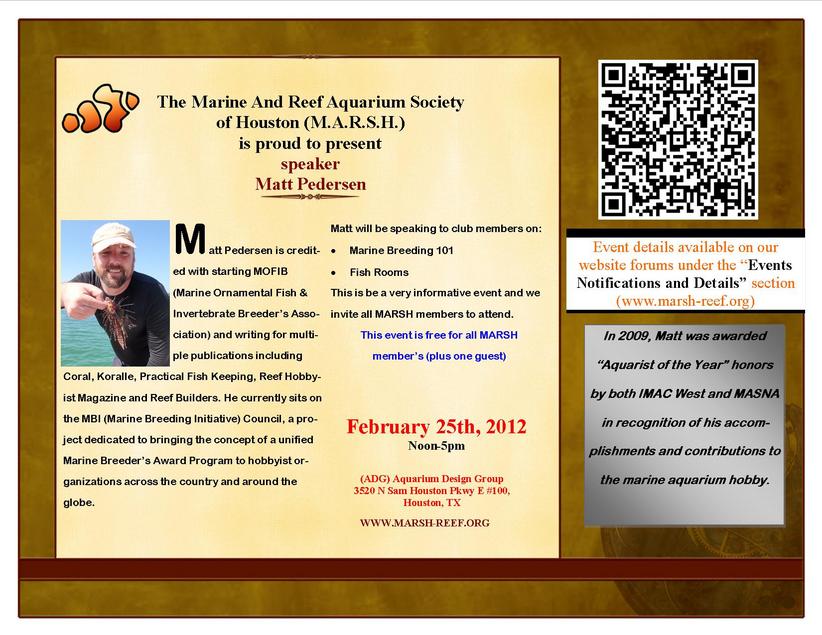 Here’s a bit of news for the local crowd. For their first event of 2012, the Marine Aquarium and Reef Society of Houston (or MARSH) is inviting a very special guest to give a two-part discussion involving marine ornamental breeding and a detailed look into fish rooms. This guest is none other than 2009 Aquarist of the Year Matt Pedersen, who has a laundry list of accomplishments within the hobby that would put just about anybody else to shame. Besides being a very successful fish breeder, Matt basically founded the Marine Ornamental Fish & Invertebrate Breeder’s Association (MOFIB for those who like acronyms), was pegged to be the breeder who handled the amazing PNG Lightning Maroon Clownfish, and has written for numerous publications and aquarium blogging sites. The speaking engagement will take place this Saturday, February 25th at Aquarium Design Group. ADG, as they are abbreviated, has played host to numerous MARSH events throughout the years, and their swanky new facility will be the perfect spot for local hobbyists to soak up the vast information they’ll surely get treated to.

Unfortunately, I won’t personally be able to attend this particular event. Work has reared its ugly head once again and I’ll be spending my Saturday with my nose to the grindstone in the middle of a major project. It’s a bit disappointing actually because I was asked to make a brief presentation in between the two talks by Matt, but I guess I should consider myself lucky because I’m sure whatever presentation I made would just pail in comparison. Fortunately, I was able to sit in on Matt’s talk about fish rooms during last year’s NextWave hosted by the Dallas Fort Worth Marine Aquarium Society (DFWMAS).