Trending
You are at:Home»General»Neurotoxins Found in Shark Fins 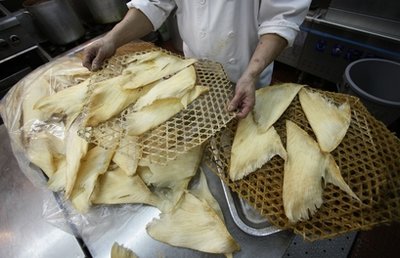 Shark fin soup has been a long standing and traditional dish of many cultures, but due to the fact that its main ingredient is obtained in such a gruesome way, many of these cultures are moving away from the soup altogether, especially as generations get older. The practice that is being looked down upon involves, in a nutshell, a shark being hauled to the ocean surface only to have all of its fins removed, and while still alive and suffering, it is dumped back into the ocean where it inevitably dies. Conservations efforts have been somwhat fruitful in getting that message across, and it looks like their message is getting a much needed shot to the arm. According to a recent article on MSNBC, a group of scientists studying sharks in Florida came to the conclusion that sharks have very high concentrations of the  neurotoxin Beta-N-methylamino-L-alanine (BMAA), which has been linked to both Alzheimer’s and Lou Gherig’s Disease. The concerns are further esclated with data from an unrelated story involving locals in Guam eating fruit bats that also had cencentrations of BMAA in their tissues. That particular study showed a link between bat consumption and the degenerative brain diseaes, and researches from shark study hope the findings will further curtain the act of finning.

In the shark strudy, seven species were identified and studied extensively. These include the blacknose, blacktip, bonnethead, bull, great hammerhead, lemon and nurse sharks…most of which are very common. Tiny fin clippings were taken fro each shark and analyzed. The results showed a range of 144 to 1,838 nanograms of the neurotoxin per milligram of fin, which is a range consistent with the two denegerative diseases listed above. The big concern, obviously, is that people consuming shark fin soup are exposing themselves to a dangerous toxin