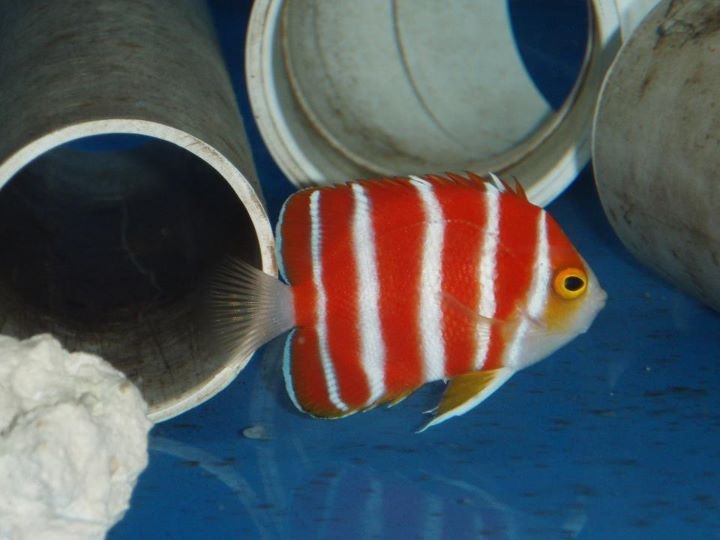 When it comes to uber rare fish, the Peppermint Angelfish (Paracentropyge boylei) is undoubtedly the king of the mountain. This extraordinarily beautiful angel hails from the very deep waters surrounding the Cook Islands and Moorea and is so rare, in fact, that only one individual is known to exist in captivity. Well, that is until today. We stumbled across another amazing peppermint angelfish that is sitting pretty among a forrest of PVC fittings in a quarantine aquarium at the Waikiki Aquarium. This fish is very small, at least in comparison to the only other P. boylei in captivity (which currently lives in a Japanese aquarium), which is demonstrated by the angel’s ability to swim comfortably through 3″ fittings. We currently don’t know to much about this fish, but what we do know is that it was apparently loaned to the aquarium by Richard Pyle, a well-published zoologist who has an affinity for marine life, though we are uncertain how the fish came into Pyle’s possession at this time. We assume that Richard had a hand in the fish’s collection, but that’s purely speculative at this point.

The reason that the P. boylei angelfish is so rare is due to the fact that it lives in such deep waters. Traditional diving equipment is useless when it comes to collecting these fish, as a trip to their stromping grounds requires rebreather diving gear just to get to. On top of that, bringing a deepwater fish to the surface requires a whole other set of special skills that require tremendous amounts of time to accomplish. At various depths, the diver must stop and allow both himself and the fish a little time to adjust to the intense decrease in pressure. Sometimes, a small needle is poked into the swim bladder of the fish in order to degas it, which prevents the bladder from expanding to the point of rupture and internal damage.

Despite the usual issues with deepwater collecting, we are happy to report that this tiny peppermint angel is doing well according to accounts by Norton Chan, who works at the Waikiki Aquarium and is the invidual that uploaded the image to his Facebook page. A brief video of the fish has also been uploaded, but FB doesn’t make it easy to embed those in articles such as this.

We also want to thank Charles Delbeek for digging up the image and sharing it on his own page.