Trending
You are at:Home»Aquarium Livestock»More Footage of the Peppermint Angelfish (Paracentropyge boylei) at the Waikiki Aquarium 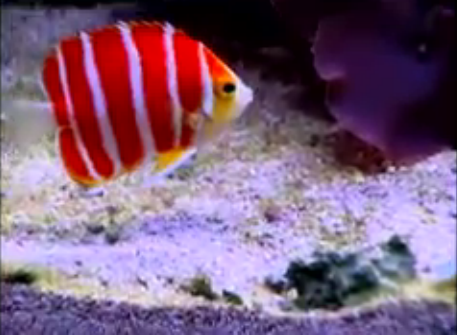 Click on the Image to be Taken to the Video

The super rare Peppermint Angelfish (Paracentropyge boylei) is an amazing fish to say the least. Up until March of this year, only one was known to exist in captivity and the aquarium community almost never got to see images or videos of the fish. Fortunately, the Waikiki Aquarium got hold of one thanks to renowned explorer, Richard Pyle, and recently put it on display. This move didn’t just allowing the Hawaiian locals and tourists to see this fish’s unmatched beauty first hand, but it also means we, the online aquarium communtity get to see plenty more digital media of the angelfish. The latest video comes to us from KITV, a Hawaiian news channel who does a great story on the fish along with some words from Richard Pyle himself.

In the brief clip, Richard explains that he caught the fish at a depth of 100m (a little more than 330ft) and actually had to extend his dive time in order to capture the elusive female angel. Interestingly, this is probably not the only P. boylei hauled up during a string of dives, as Richard states “this is one of the females”. So, we’re assuming he means there were more taken, and quite possible a male to go with it. A disembodied voice of a Waikiki Aquarium staffer in that last video clip we posted said they were supposed to be getting another of the peppermint angels, so maybe multiple fish were caught. We could only hope. Delving a little further into the clip, it is revealed that the fish was actually sought out by the Smithsonian Institute for study, but that the fish would have been killed and preserved. Luckily, Pyle realized the value a live specimen would have and arranged for it to be sent to the Waikiki Aquarium.

Despite its rarity, the Peppermint Angelfish isn’t the rarest fish in the tank, though. It shares its new digs with a fish that’s labeled as the rarest in the world, the Abei Angelfish (Centropyge abei).