Trending
You are at:Home»Aquarium Equipment»Huge Aquariums at the Miami Marlins Gaudy New Stadium 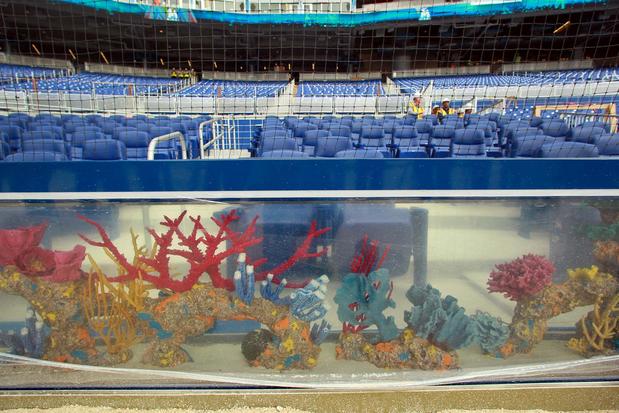 Way back in June of 2010, we heard about plans to build a pair of huge saltwater aquariums behind home plate at the brand new home of the then Florida Marlins. At the time, the facilities were still just a handful of sketches on a drawing board, but after a couple of seasons and a name change, the Miami Marlins are finally drawing closer to the completion of this new ballpark. Though the facilities are still undergoing last minute touches in order to get ready for the MLB pre-season activities, the aquariums appear to be fully functional, if not 100% complete, and they’re presence is already hitting a nerve with us.

The aquariums are said to be flanking home plate on either side, with the tank to the right coming in over 600 gallons and measuring 34 feet in length. The other aquarium is slightly smaller, tipping the scales at 450 gallons and achieving a length of 24 feet. Both tanks are made of fiberglass with clear acrlic panels measuring over an inch thick serving as the front and rear panels. Designers of the aquariums say they are unbreakable, and in keeping with the competitive spirit, Marlins first basemen Gaby Sanchez decided to test this statement. According to various reports, he did this testing by hurling a baseball against the tank as hard as he could. Fortunately, the tank did not break and apparently the ball didn’t even leave a mark. According to club president David Samson, the tanks have “… an extra layer of glass in front of the glass that’s in front of the fish.”

Regardless of the protections put in place by the Marlins organization, we take serious issue with not only the tank being berrated by baseballs, but we even protest its presence in the park. It’s an unnecessary amenity that is meant to keep the waining attention of baseball viewers, which there isn’t exactly a whole lot of in the Florida area.

Image at the top of the page courtesy of Palm Beach Post.