Trending
You are at:Home»Aquarium Equipment»Comparing the Nimble Super with Other Magnets 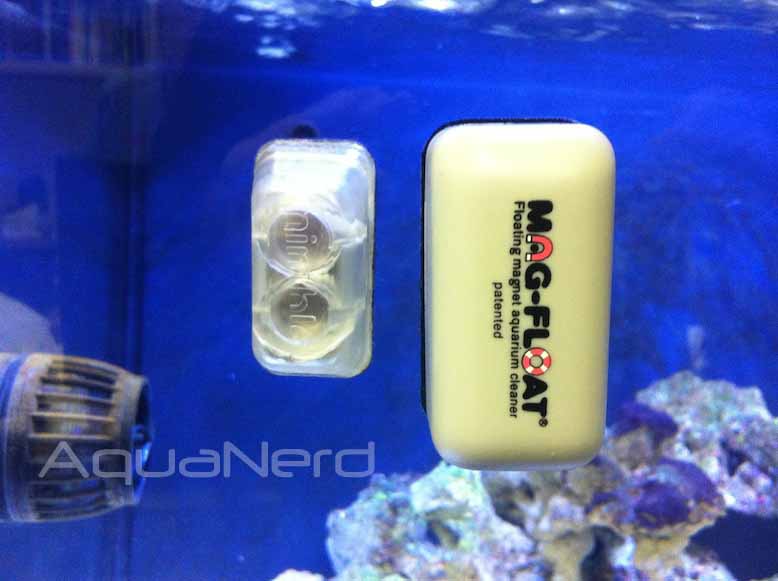 Back in March, we got our chance to take the Nimble Super algae magnet for a test drive. We put the tiny magnet on our 90-gallon tank and went to town scraping crud off of the glass. While the magnet performed very well, even on some pretty thick glass, we felt that showig it all by it’s lonesome just wasn’t enough. We needed to compare the Nimble Super with other popular magnets used in nano aquariums. With that said, we tossed the magnet on a small tank with the Mag-Float Small cleaner for a little side-by-side cleaning action.

As you can tell from the photo above, the Nimble Super is significantly smaller than its fellow aquarium cleaner. In addition to being smaller, it also has a clear housing. Both of these features make the Nimble magnet a bit easier on the eyes, which is important when the visual space is so limited, but that’s not what impressed us the most. While the Nimble lacks the larger cleaning area, it’s absolutely perfect at getting into those rounded corners of the mass produced all-in-one nano aquarium. The Mag-Float could never get into those same places, often requiring us to clean the corners by hand to get those pesky leftovers.

In terms of the cleaning pads, both the Nimble and Mag-Float cleaners offered very similar cleaning surfaces. The dry side of the magnets each had the standard issue felt-like material, while the algae scraping surface was full of rigid bristles. On flat surfaces, the two magnets perform nearly identically, but like we said it’s the corners that make the difference.

As far as the magnet strength goes, the Nimble Super does sacrifice some power in order to stay small and lightweight. Fortunately, it’s still strong enough to easily handle glass up to 1/2″ thick and we wouldn’t be surprised if it could go well past that mark.

The Mag-Float does have an edge over the Nimble magnet…it can float. The Nimble gives up the ability to float in order to stay small, choosing to fill any extra space with powerful magnets instead of a bulky pocket of air or buoyant material. This may be a make or break point for some hobbyists looking for magnetic algae scrapers, but through our relatively extensive use, we actually haven’t had a need for the magnet to float. It sticks to the glass even through vigorous back and forth cleaning, and if it does fall, the tank is shallow enough that it’s not much of an issue.