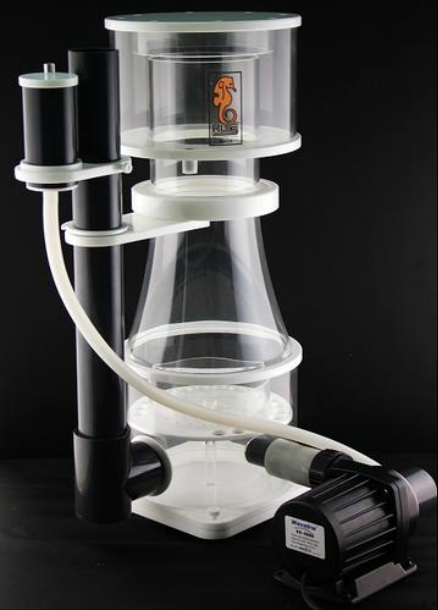 Last month, we stumbled upon a new controllable water pump in the Waveline DC-5000 from RLSS. The pump looked like an inviting option for returning water from our sumps back to our display tanks, but the feature rich pump isn’t going to just be moving water in its new role. The RLSS crew have incorporated a beefy needlewheel impeller into the pump and have mated it to a a beautiful series of external and in-sump cone shaped protein skimmers. This Waveline powered line of skimmers currently features 8 different models spread across three different sized bodies.

More details and a video can be seen below.

The Waveline powered protein skimmers come in 8″, 10″, and 12″ diameter bodies. All three sizes come in external and in-sump models, but the 8″ and 10″ are also available in space saving internal models where the pump has been mounted under the protein skimmer. Besides the controllable pump, the RLSS skimmers come with the pretty standard feature set found among protein skimmers these days. A bubble diffusing plate increases dwell time with the skimmer and rubber feet keep the noise from vibrating parts down to a minimum.

Despite all of these amazing features, there’s one that stands head and shoulders above the rest. We’re talking about the price. Considering the going rate of most higher skimmers with non-controllable pumps, you’d assume that the least expensive of the models listed above wouldn’t even come close to dipping below $1000 at the retail level. But what if I told you the least expensive models was closer to $600? You’d probably think I was crazy, but that’s the truth. The entry level model is somewhere around the mid-$500 price point.