Trending
You are at:Home»Aquarium Equipment»Maxspect Introduces the Razor LED Fixture 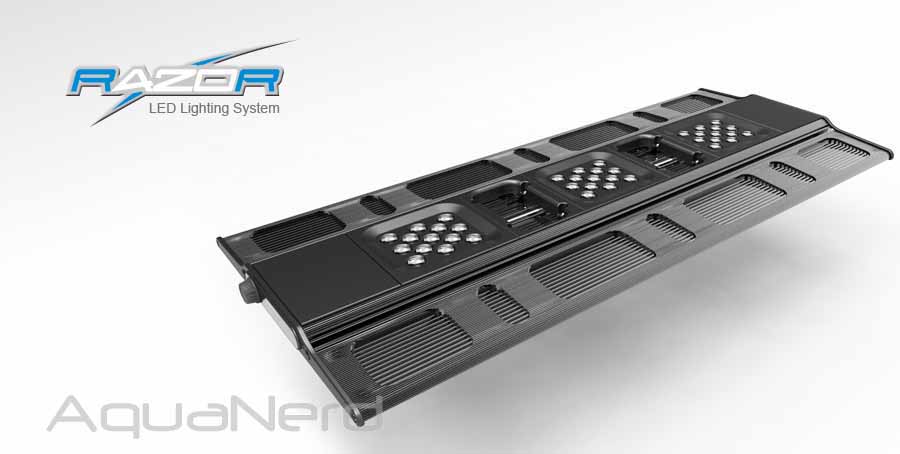 The new LED equipment announcements keep rolling in just a head of Interzoo, with the latest fixture coming from the guys at Maxspect, who’s Mazarra LED modules gained quite a following last year. Their new fixture, called the Razor, works off the same general design as the Mazarra, but instead of having independent modules that can be linked together, Maxspect has taken the liberty of tucking three of them into a very well laid out and sleek looking fixture. And in keeping with the name, the Razor sports an incredibly thin design with a unique cooling system to keep the emitters operating at ideal temperatures. Two different models will be available, with the only difference between them being the color of the emitters in each of the fixtures. This leads us to believe that the Razor won’t share the same customizable features of the Mazarra, though with the on-board controller, the spectrum can still be fine tuned. 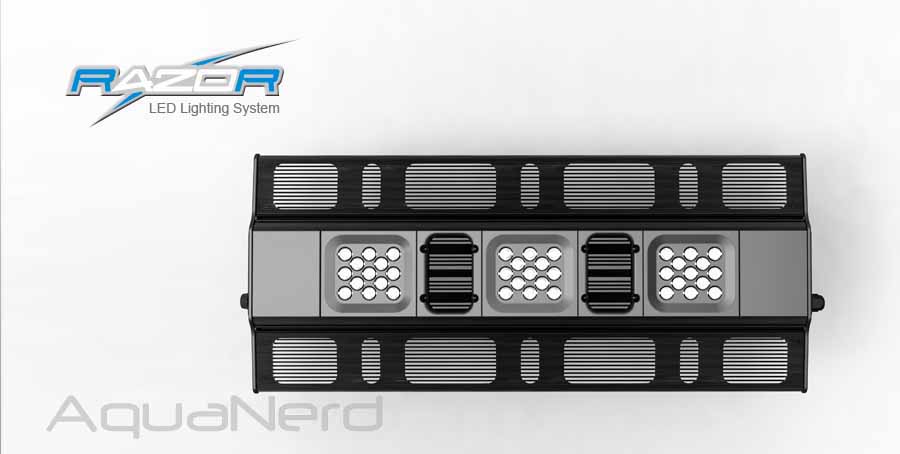 The LEDs offered in the Razor fixture primarily come from the Cree XT-E and XP-E lines, with the exception of the super actinic which is an Epileds Dual Core emitter. In terms of the colors offered, it would depend on the model. While both fixtures dish out the color in a dual channel configuration, the Razor M10000 offers up a warmer look (10,000K) and the M16000 puts out a bluer light (16,000K). Obviously both models derive their namesakes from the resulting color emitted by the fixture when all lights are fired at 100% intensity. Both models have five different colors of LEDs, which include Cool White (8000K), Warm White (3000K), Blue (465-485nm), Royal Blue (450-465nm), and Super Actinic (410-420nm). The colors are focused into the aquarium with the help of 90° optics that do a good job balancing light spread with water penetration. 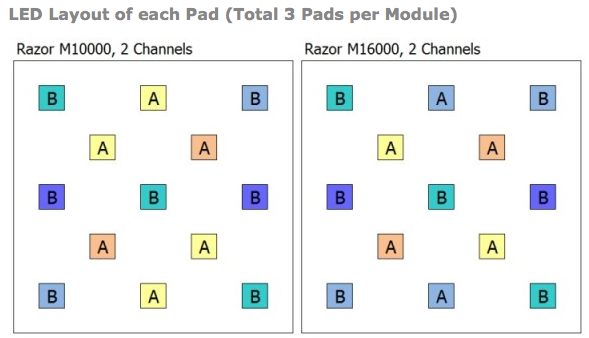 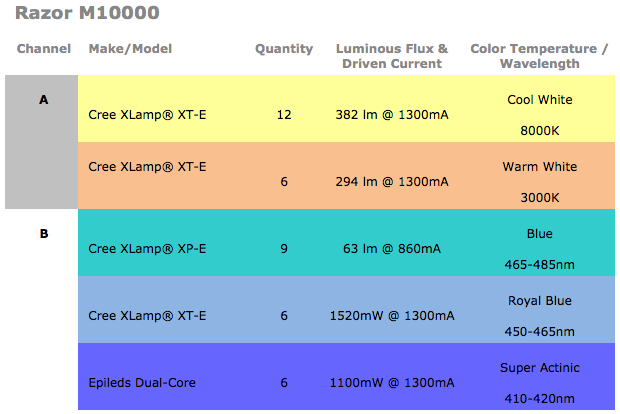 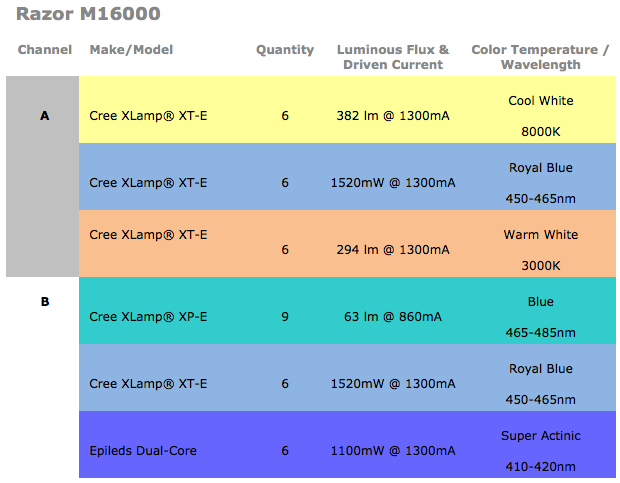 Despite being packed to the brim with LEDs that consume a total of 160watts, the Razor is passively cooled. The fixture’s body is made entirely of aluminum, which basically acts as one giant heatsink that dissipates heat. This also means that the fixture runs dead quiet because there are no fans. Heck, you won’t even hear the low hum typically associated with fluorescent lighting, allowing the trickle of the water to be the only sound dominating the room housing the aquarium. 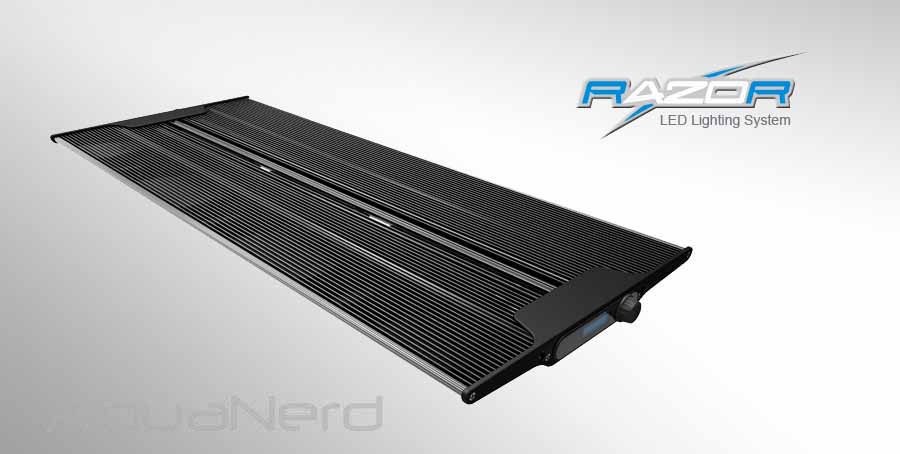 In terms of controllability, the Razor doesn’t have as robust a controller as the Mazarra, but the built-in controller allows users to program their photoperiod for six time-points and fully control the intensity of the two channels. This amount of control should be perfectly adequate for any reef aquarium. In terms of how the Razor is mounted to the aquarium, the fixture can either be suspended with a cable kit or mounted directly over the tank with a pair of simple, adjustable legs. 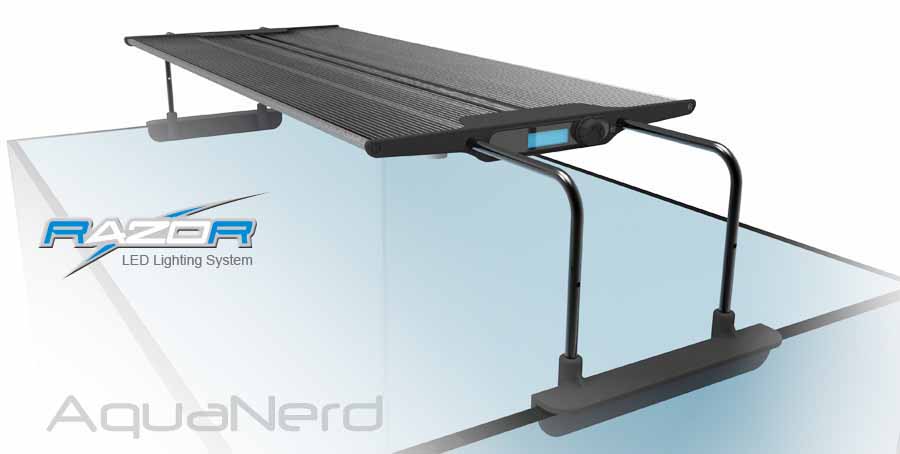 We aren’t aware of pricing or availability, but we’re sure the Razor will make its public debut at Interzoo where that information will come to light. For a little more reading material on the Razor, visit CoralVue, who happens to be the sole US distributor for Maxspect. 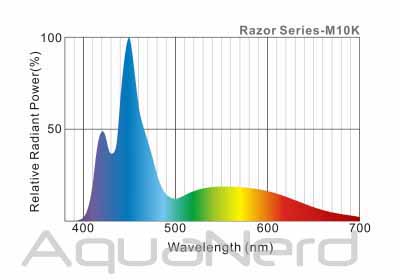 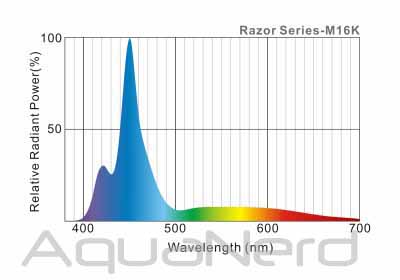