Trending
You are at:Home»General»Aquarium Maintenance Disasters and Near Misses, Let’s Hear ’em 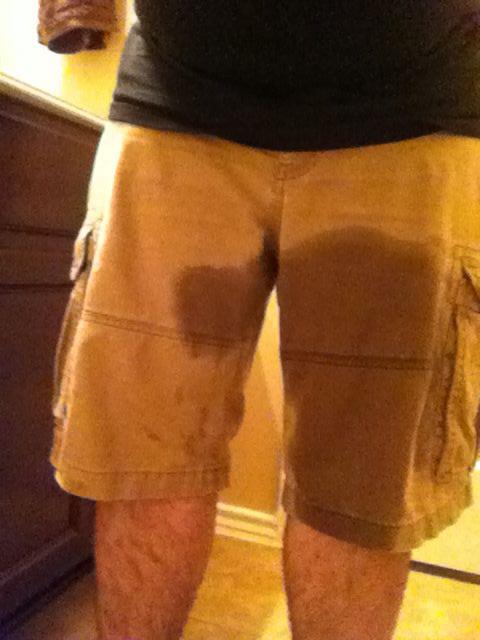 The water spill that got us reminiscing about our old aquarium disasters.

As fans of our Facebook page may be aware, we had a slight aquarium maintenance related mishap when performing a water change over the weekend. While the slip up was only a minor one that resulted in a pair of wet shorts and a few jokes regarding incontinence, it got us thinking about all of the disasters and near misses that we’ve encountered through the years. None of them were life threatening, and fortunately none of them resulted in any long-term injuries, but the memories of the pain and discomfort alone are enough to change some behaviors. And given the nature of this blog, we decided to share some of our past brushes with disaster, a few of which can be read about below.

Aquarium Related Infection on the Hand
Every year, at least one story surfaces about a hobbyist who contracts a terrible infection from dabbling in an aquarium. While working at a local fish store years ago, I had one such experience. Unbeknownst to me, but I had a small cut on my index finger of my left hand. During my normal routine of cleaning fish tanks at the store, something invaded the injury and it started to swell. I thought it was a spider bite at first, as the injury had what appeared to be bite marks, and as the day went on, the swelling only increased. At the scariest point, the finger had swelled so much that I couldn’t even bend it. So, to take the safe route, a trip to the ER ensued. The doctor handed over antibiotics, said that it didn’t look like a spider bite, and blamed it on the aquariums. After a week of taking antibiotics and keeping the hand out of the aquariums at the store, the wound eventually broke open and puss oozed out. As sick as that sounds, it actually relieved the swelling, so it was a welcome sight. After another week or so, the wound was completely healed and the only memory we have of it is a small scar.

Water Change Back Injury
Water changes can be very gruesome and laborious tasks. They require the relocation of large volumes of water, and depending on how that relocation occurs, the human body can be put under severe physical stress. In one such stressful event, I had just finished doing the actual water change when I proceeded to carry buckets full of old saltwater out into the garage for disposal. I never felt any discomfort during the process, but as I sat down on the couch for a breather, I noticed a sharp pain in my lower back. The pain grew more intense as I sat in place, forcing me to sprawl out on the floor and apply an ice pack, followed by a heating pad. The pain was the most intense pain I’ve felt that was related to aquarium maintenance, and it certainly made me rethink my water change routine, especially as I get older.

Spilled Water Frying an Electrical Outlet
While filling a brand new aquarium for work at a local fish store, my boss and I noticed a strange hissing sound followed by the distinct smell of burning electronics. Since we were installing a tank at a customer’s house, we had to stop immediately and see what was going on just so the house wouldn’t burn to the ground. At this point, nothing in the aquarium was actually plugged in, so we didn’t have a clue where the smells and sounds were coming from. But the source was quickly noticed just by stepping backwards during the initial head scratching process of tracking down the problem. When we each took that step back, we noticed that distinct squishing sound, which prompted us to turn around to see what sort of mess we created. To our surprise, the entire area rug was soaking wet with saltwater and the culprit was a piece of tubing that had been placed into a full bucket. The tube created a siphon, draining around three gallons of water onto the rug. Normally, this would just be an inconvenience. But in this house, the rug didn’t just hide bare floors. Under the rug was a 120volt outlet that was boiling off water and tripping circuit breakers. We quickly soaked up as much water as we could and attempted to dry out the plug. Eventually, we were successful, but it was quite a scary moment to say the least.

Overfilling a Sump with RO/DI Water
It seems that everyone has overfilled a sump, and being in the hobby for a while, I’ve managed to do it a few times. On one specific occasion, I turned on the line that feeds RO/DI water into the sump from the unit in order to do some topping off. It was early in the morning, the return pump had been aspirating slightly, and the sump needed to be refilled before I left for work. In the hustle and bustle of getting ready for work, the freshwater line to the sump was left open, and the sump slowly filled with water. About 30 minutes into my commute, my wife called me and said that the tank was making a splashing noise. Suspecting the cause of the problem, I told her to open the cabinet doors to see if the sump was full. Sure enough, it was not only full, but overflowing with water. So, I make a quick u-turn and headed home to deal with the disaster. After arriving home, the freshwater line was turned off, the excess water was drained off, and towels and fans were put in place so that the water in the carpet would dry while I was at work. The salinity in the aquarium dropped from 35ppt to around 30ppt, but fortunately the corals and fish didn’t seem to mind. I spent the next couple of water changes correcting the salinity, and the carpet was replaced months later when that tank was broken down during a move.

Overfilling Bucket with RO/DI Water
The story we’ll finish with is similar to the last, but had far less potential for stress. While living in a two story apartment, I was filling a bucket of water in the upstairs bathroom where the RO/DI unit was hooked up. Once filled, the bucket would be carried downstairs to the aquarium for topping off or water changes. For some reason on this instance, the bucket was sitting on the floor in the bathroom instead of the bathtub. The water was turned on and forgotten about, and eventually the bucket overfilled. Unfortunately, I had completely forgotten about the water and even the site of dripping water couldn’t jog my memory. As as was standing by the tank on the first level, water began pouring out of the air conditioner vent in the ceiling. Totally freaking out at this point, I called the apartment repairmen, who said they’ve be there in a few minutes. Then it dawned on me. The cause of the leak wasn’t something in the walls or plumbing of the apartment. Instead, it was totally my fault. I ran upstairs, turned off the water, essentially destroyed the evidence (I was a broke college student who couldn’t afford to fix the ceiling), and acted amazed and confused when the maintenance man showed up. The leaking water didn’t leave any damage, fortunately, but it certainly made me think twice about filling up a bucket outside of the bathtub, at least in that apartment.

So, a bunch of my mistakes have just been laid out for your enjoyment, and I’d love to hear some of your disasters and potential disasters. They are great learning events for other aquarium keepers and could potentially prevent other disasters from happening.