Deltec, a German company well known for their high end aquarium equipment, has a new protein skimmer model out, but it’s far different than what they’ve offered up in the past. Instead of being a high dollar skimmer with loads of features that’s aimed at huge saltwater aquariums, the new MCX300 is a simple device geared for the smaller tank crowd. On top of that, it’s pretty affordable too. At just £134.99, or roughly $200 at current rates, this skimmer is an inexpensive option for hobbyists with tanks of 85 gallons or less. And those aren’t even the most interesting details found in this little foam fractionating package.

What really caught our eye with this Deltec MCX300 protein skimmer was the pump. Unlike other Deltec models which use pricey, high performance needlewheel pumps, this new skimmer uses a MaxiJet 1000 pump. Sure, it’s not your standard off the shelf pump, but that doesn’t change the fact that it’s a MaxiJet, which is arguably one of the most durable and long lasting water pump brands on the market. Deltec did their own modifications to convert the water pump to a powerful little bubble chopping beast. These mods include replacing the stock impeller with a Deltec pinwheel and modifying the intake to also draw in air. Showing off just how much air is traveling through the pump is a built in air flow meter (pictured below). 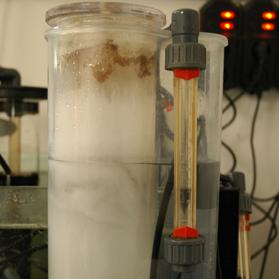 The reason we are so thrilled to see MaxiJet pumps at the heart and soul of this skimmer is the fact that they are inexpensive and readily replaceable. For most high end skimmers, a nagging problem for hobbyists has been finding replacement pumps that don’t cost as much as the skimmer itself. Fortunately, the MaxiJet will solve most of those issues, though finding specialized pinwheels and venturis for them might be a difficult feat unto itself.

According to a recent description on D-D The Aquarium Solution, these features allow the MCX300 to draw in 150 liters per hour of air while being able to handle tanks from 250-320L. As for dimensions, the small footprint skimmer measures a measly 130mm x 110mm (or 5.12″ x  4.33″). For those keeping track of the nano aquarium equipment market, this puts the MCX300 in direct competition with the Tunze 9004 Nano Skimmer, as both have similar sizes and tank ratings. 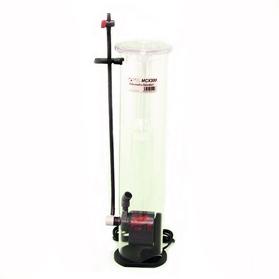 On a final note, the MCX300 only appears to be available to European hobbyists as the moment. Hopefully that will change in the coming months and we’ll see yet another nano friendly option here in the states eventually.