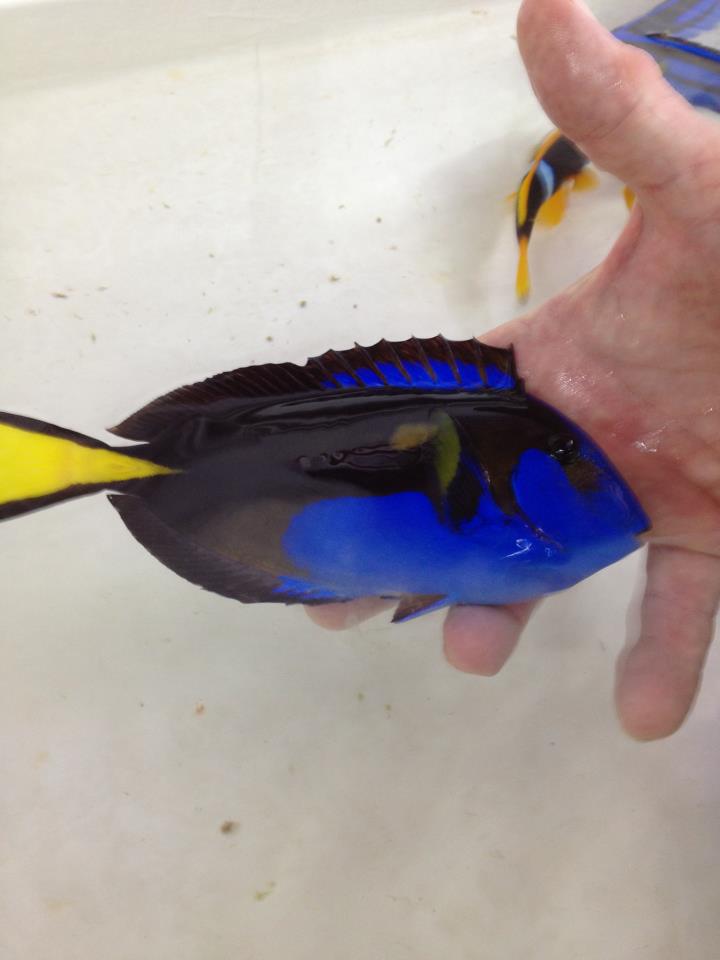 Little more than a week ago, we found ourselves gawking at a very interesting black and blue hippo tang that was shown in a brief video clip from what we presumed to be a representative from Sea Dwelling Creatures. Needless to say, the disappointingly short video left us wanting to see more of this unique fish, and thankfully it looks like we got our wish…sort of. Walt Smith, a long time force within the aquarium industry, recently got his hands on his very own black and blue hippo tang and shared this cell phone image on the Walt Smith International Fiji Facebook page. It’s not the same individual we wrote about earlier, but it certainly bears a striking resemblance to that fish and is just as drool worthy.

The black and blue hippo that surfaced at Walt Smith’s facility, like the one we wrote about last week, has a very generous amount of black coloration covering its body, which is what makes it so different from the norm. The black extends down the front of the fish’s face and covers the entire top half of its body, and a small yellow patch sits just behind the eyes. Unlike the first black and blue hippo tang we discussed, however, this most recent find does have a lot more blue on its body and more closely resembles the fish’s natural coloration and patterns. Still, it’s a very unique fish that certainly deserves to be highlighted.

On an interesting side note, it would appear that these aberrant blue hippo tangs are starting to show up in more abundant numbers, granted those number are still very small. We know of at least four or five different cases of these black and blue hippo tangs, and we’ve been hearing reports from aquarium hobbyists and industry contacts of several more.