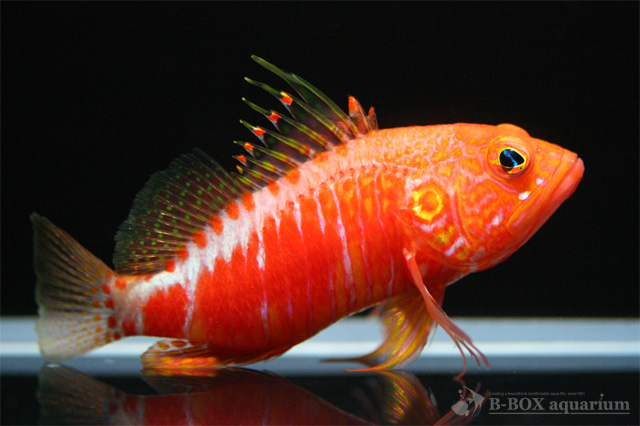 When it comes to ultra rare fish, the Japanese aquarium scene seems to be the most happening place to go. The livestock vendors of the island country are always hauling in the rarest of fish species, and the gang at B-Box Aquarium doesn’t disappoint with their latest acquisition. They recently got their hands on the very rare Pelicier’s Perchlet (Plectranthias pelicieri), a deepwater basslet species that has only entered into the aquarium trade a handful of times at most. The reason for their very limited numbers, like most rare fish, is their distribution and natural habitats. These fish are found up to 100m below the ocean’s surface, which requires specialized gear to reach.

The P. pelicieri perchlet, a cousin of the geometric hawkfish, has a known distribution in the Indian Ocean, especially from Mauritius and South Africa, and it can be found in southern Japanese waters. That said, B-Box Aquarium’s translated description of the fish leads us to believe that their individual was taken from New Caledonia, a small island south of Vanuatu and east of Australia.

Like its geometric hawkfish relatives, the Pelicier’s Perchlet doesn’t swim well, but scoots along the substrate looking for food. In the aquarium, the perchlet will hide in the rock structure and timidly venture out along the bottom, as seen in the video below.