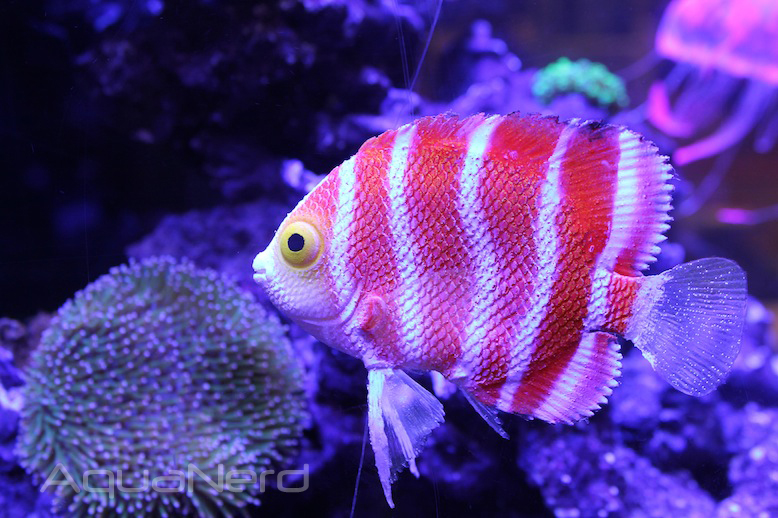 There may only be two peppermint angelfish (Paracentropyge boylei) living in captivity, but that didn’t stop Eshopps from pulling a fast one on gullible MACNA goers and the thriving online aquarium community craving every update from the show. They introduced a couple of brand new aquarium ornaments this year, and the deceiving movements and realistic look of peppermint angelfish ornament had a lot of people fooled. The plastic and buoyant fish is tethered to the bottom of the aquarium with a single piece of fishing string (which is almost invisible). The string attaches the fish toa suction cup, which was fixed to the bottom of the tank and kept the fish in dodging about in a small area while the water flows around it. To further sell the look, the fish has rubber pelvic fins that flap in a very lifelike way.

While most of the show’s attendees weren’t fooled by the plastic imposter, we heard stories of people who were absolutely convinced that the fish was real. We even had a little fun with it ourselves, as we posted a low-quality cell phone image of the fish on our Facebook page. After a ton of comments from people who thought it was real, we decided to squash the cruel joke and reveal that the fish were fake. Still gave us a chuckle though.

That said, we think this ornament from Eshopps is totally awesome. None of us can afford a peppermint angel even if one became available, so why not get something that looks just like a real one…except it costs so much less.