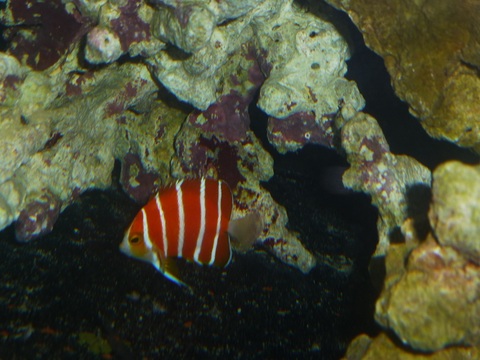 The guys at Blue Harbor in Japan have either just landed the catch of a lifetime, or they’re playing a terrible prank on all of us. They recently shared a few images and even a brief video clip showing not only one, but five different Peppermint Angelfish (Paracentropyge boylei) being acclimated to one of their fish holding systems. Prior to this footage, there were only two known peppermint angels in captivity, with the most recent fish showing up at the Waikiki Aquarium courtesy of Dr. Richard Pyle, who donated the fish to the world renowned aquarium.

With that in mind, and the fact that Eshopps has some rather deceptive looking Peppermint Angelfish lookalikes, you could certainly see why we approach this footage cautiously. In all seriousness though, we have no reason to doubt that Blue Harbor really did get five peppermint angels. They have been consistently pulling in some of the rarest livestock that the aquarium industry has ever seen, and they’ve even gotten their hands on fish that weren’t described by science.

These fish will probably never see the US aquarium market, as they are extremely high priced and there is a huge demand for rarities such as these in the Asian aquarium market. We’re not sure these angels will be able to command the five-figure price tag that they are known for, but we know that this will probably be the only time a haul such as this is brought in, so who knows what kind of price they’ll dictate on the open market. Regardless, it’s out of our reach and we can only hope to bask in the glory of some far more fortunate fish keeper in this instance.