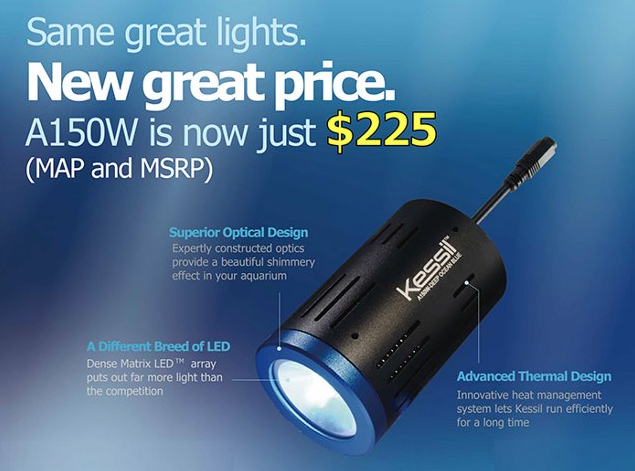 LED technology is getting a little bit cheaper, and that trend really bodes well for aquarium keepers looking to upgrade their lighting while trying to not break the bank. We recently saw a $100 price drop in the newly released second generation Radion XR30w from EcoTech Marine, and now Kessil is getting in on the action by dropping the price on one of their own fixtures. The extremely popular A150W LED pendant will have a new minimum advertised price of $225, which is about a $40 drop from the original price. This price drop is currently only happening in the United States, but Kessil has hinted that a similar price drop is expected for customers abroad, though a date has been determined.

There’s a little speculation on aquarium forums and social media sites that Kessil might be dropping the price so that they can introduce a second generation with more bells and whistles. While we can certainly appreciate that notion, we’re not sure that’s what is happening. The technology is getting cheaper, and as Kessil perfects their methods, the fixtures might not cost as much to produce. But honestly, who knows but the brains at Kessil. I don’t see many changes coming our way, but we’ve been surprised before.