Trending
You are at:Home»Reef Conservation»Add Panther Groupers to the Growing List of Fish Invading Florida Waters 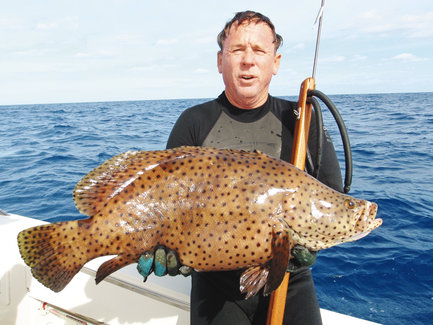 As if the lionfish invasion in the Atlantic wasn’t enough, it looks like there might be another non-native predator getting cozy in the waters around Florida. According to a recent story by the Huffington Post, spearfishermen diving off North Key Largo, Florida on December 23rd came across what they thought was a black grouper. The men chased the fish under a ledge, evnetually spearing it as it started to emerge. They soon realized, however, that what they had was not a native grouper. They hauled the 15-pound, 27-inch fish to the surface took photographs, and went home to consult the internet. After realizing the fish was a humpback grouper, a native of the Pacific Ocean, the divers contacted Lad Akins, director of special projects for Key Largo-based Reef Environmental Education Foundation (REEF). Tissue and organ samples were taken, and the fish was positively identified as a male humpback grouper.

Lad believes the fish to have originated from the aquarium trade, as juveniles are quite popular due to their coloration. Unfortunately, these fish outgrow their captive digs and their owners occasionally release them into local waters. While this species isn’t exploding in numbers like the lionfish, as only 5 or 6 individuals have been reported since the 1980s, the possibility of this predator taking a strong foothold in the region is still very good. Obviously the panther grouper speared in this story was doing quite well, as it attained its maximum size. That said, the fish does lack the venomous spines and aposemetic coloration that have allowed the lionfish population to grow out of control.