Trending
You are at:Home»Reef Conservation»EPA Rule Changes for Shipping Vessel Ballast Water to Cut Down on Invasive Marine Species 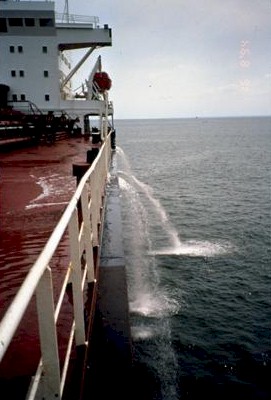 When people think of non-native species invading a particular area, they often blame pet owners for releasing them into the wild. Such is the case for the lionfish debacle in the Atlantic and adjoining waters, as well as the presence of big snakes in the Florida Everglades, but it’s not always the pet owners that are at fault. Now, I’m not here to tell you that the aquarium hobby wasn’t responsible for the massive lionfish invasion, but a recent move by the Environmental Protection Agency would suggest that other sources have just as significant an impact as irresponsible pet owners. The government agency recently issued a new set of requirement for cleaning ballast water from large shipping vessels, which can carry millions of gallons of water from one part of the world and dump it in another. And as well all know, oceanic waters aren’t devoid of life, not even remotely.

When ships leave a particular area, they often fill large ballasts within the hull with several millions of gallons of seawater. This is done to help keep the ship stable during incliment weather and rough seas. Then, when the ship gets to its destination, it simply offloads all of that water, releasing whatever animals or plant life that got sucked up in the first place. The animals contained in the ballast water, if they survived, could be introduced into a new area that they could easily exploit, leading to an invasion or some other negative environmental impact.

The new rules require ships to treat the water within the ballasts with UV sterilizers or harmful chemicals in order to kill “most” of the organisms. For obvious reasons, we do not favor the use of chemicals, and instead would like to see UV treatment or possibly some other form of mechanical death dealing that would have the least impact on local waters. Prior to these rule changes, ships were required to change out their ballast water 200 nautical miles from the US shoreline. Environmentalist groups felt that the previous rules still left too many possibilities for non-native species to have an impact on local waters, and many still feel these new rules don’t go far enough.

There is no hard deadline for active ships to be retrofitted with this new ballast technology, but any new ships produced after December 1st (presumably from 2012) will have to be retrofitted immediately. Ships that stay within the Great Lakes and never make it out to see are immune from these rule changes, which environmental groups also do not approve.