Trending
You are at:Home»General»Tsunami Debris Possibly an Unlikely Source for Invasive Non-native Fish 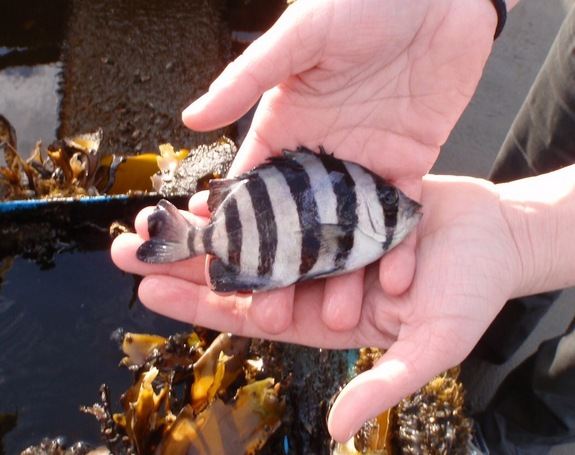 The aquarium trade is often the target for invasive species chatter, but it looks like the US has another potential source, debris from the 2011 Japan tsunami. Since the disaster, pieces of debris have washed up on US shorelines and still continue to do so. Some of this debris has contained marine life from Japan, but those organisms were either plants or invertebrates that were physcially attached to a structure, like a dock for example. But a recent discovery has just changed all of that. For the first time, it is believed that live fish have made the trans-oceanic journey stowed away in a small boat that was set adrift during the tsunami.

The fish, which have been identified as striped beakfish (Oplegnathus fasciatus) were found on March 22nd in an 18-foot skiff that had beached itself in Long Beach, Washington by a local resident. They were located in a rear compartment of the small fiberglass boat, which had was partially submerged and was missing its lid.

The resident took the fish to the local city hall, who eventually contacted Washington Fish and Wildlife biologists. The fish were all euthanized to be studied, but one was spared and sent to the Seaside Aquarium in Oregon. Scientists will use data collected from the euthanized fish to determine if they rode in the partially submerged boat the entire way from Japan, or if they got on board someone along the way, in say Hawaii. Along with the five fish, officials discovered all sorts of marine organisms living in the boat, including crabs, marine worms, a sea cucumber, scallops and blue mussels.

Biologists doubt the fish could survive the cold waters of the Washington coastline, but had the boat landed farther south, the animals could have escaped into an area that they could have easily taken advantage of, possibly leading to a breeding population of the non-native fish.