Trending
You are at:Home»Aquarium Photography»Women of the Aquarium Industry – Felicia McCaulley 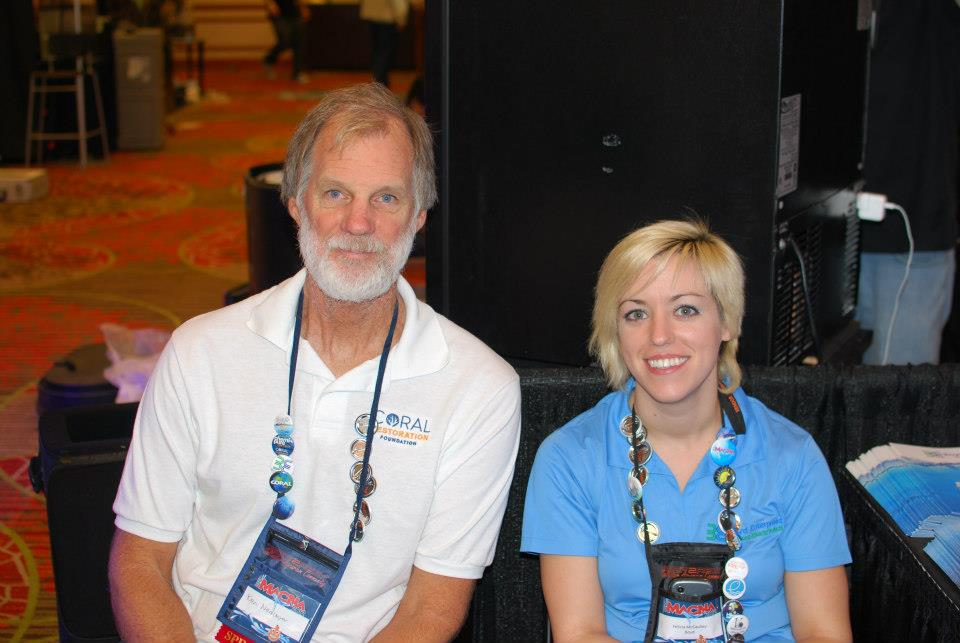 Felicia McCaulley with Ken Nedimyer of the Coral Restoration Foundation

Kicking off our discussion of prominent female figures in the aquarium industry, we turn our attention to photographer and fellow writer, Felicia McCaulley. Felicia started as an aquarium hobbyist dabbling in the retail side of the industry, and has since turned her passion for marine life into a well-rounded and long lived career that includes a lengthy stay at one of the nation’s most popular and respected marine ornamental retailers. She has capped off that experience with several articles in popular publications and websites, as well as several speaking engagements at local aquarium club events.

Felicia’s amazing journey through the aquarium industry is detailed below. 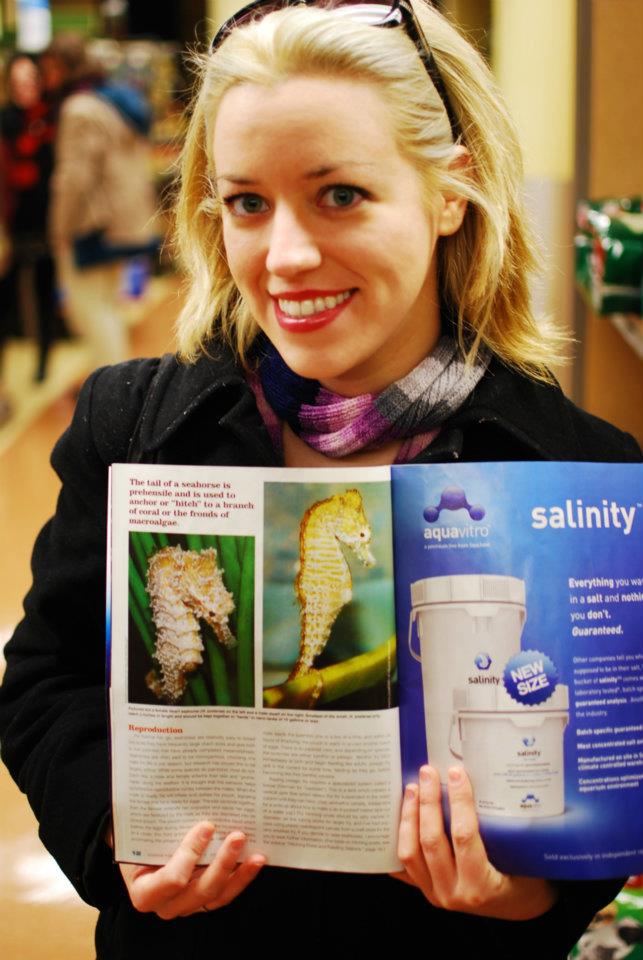 Felicia posing with a recent magazine article featuring her images.

As with most marine aquarium hobbyists these days, Felicia’s love affair for everything aquatic started when she was just a child. Thanks to her father, an avid fisherman who was also interested in learning about the environment in which he frequently interacted, Felicia’s learned all about invasive species, amphibians, and aquatic plants. Her interests in wildlife inevitably led to a childhood freshwater aquarium, which later blossomed into a well-rounded journey through the saltwater side of the hobby. 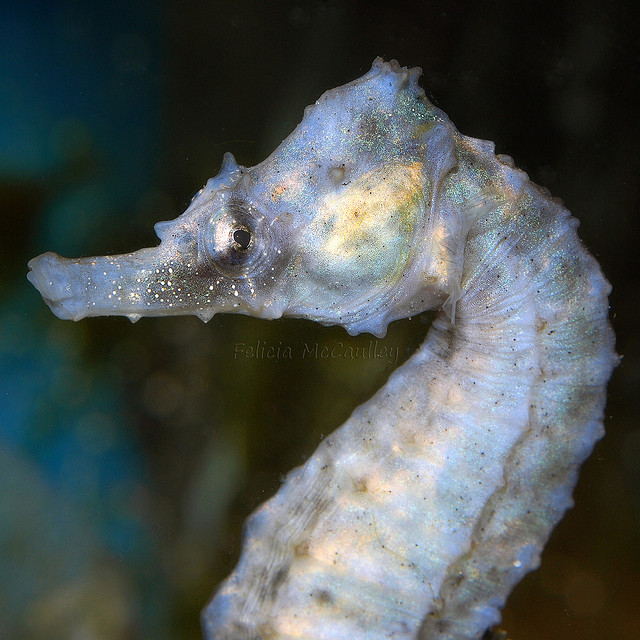 As for her aquarium related career, Felicia’s path started when she worked for PetSmart in 2002 while living in Pennsylvania. Her time at PetSmart really sparked an intense interest in aquariums, and she began collecting tank after tank. Four years later, Felicia relocated to Wisconsin and started working for LiveAquaria, the popular online retailer of aquarium livestock. Her initial position was at a customer service and technical support center, which lasted for two years. According to Felicia, whoever called LiveAquaria any time between 2006 and 2008 likely spoke to her. A couple of years later, however, a new and far more exciting position would open up for her within the company. 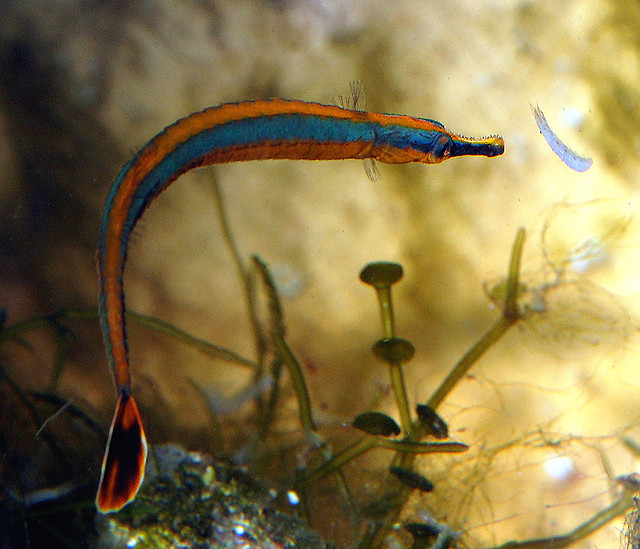 In 2008, LiveAquaria lost their primary photographer, and Kevin Kohen asked Felicia to take over the extremely important role. However, the photographer opening didn’t just mean she’d be behind a camera. Instead, the position required Felicia to be able to identify each of the animals by their scientific name, which fortunately was a side hobby of hers, as well as make a few digital touch-ups to the images to make the livestock look just as they did in person. Despite having never touched a digital SLR camera prior to taking the LiveAquaria photography promotion, Felicia took to it quickly and obviously did a fantastic job. Most of her images accompanied new additions to the very popular Diver’s Den section of the LiveAquaria’s website. 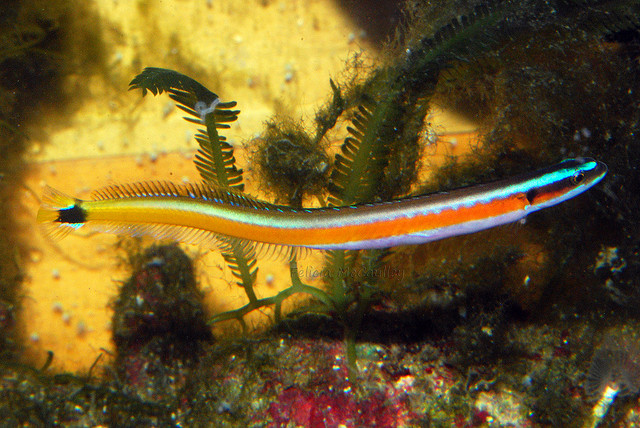 On top of being the company’s photographer, Felicia also sent mass customer email updates, created an in-house Zoanthus ID database, maintained Quick Stats (which we’ve all referenced a time or two), and worked with promoting Diver’s Den items on Facebook and other social media sites. Felicia also wrote several species profiles for LiveAquaria, including some of pipefish, the Catalina goby, and all of those on the seahorses to name a few. Her writing skills were also used for various articles on the Drs. Foster and Smith Pet Blog. 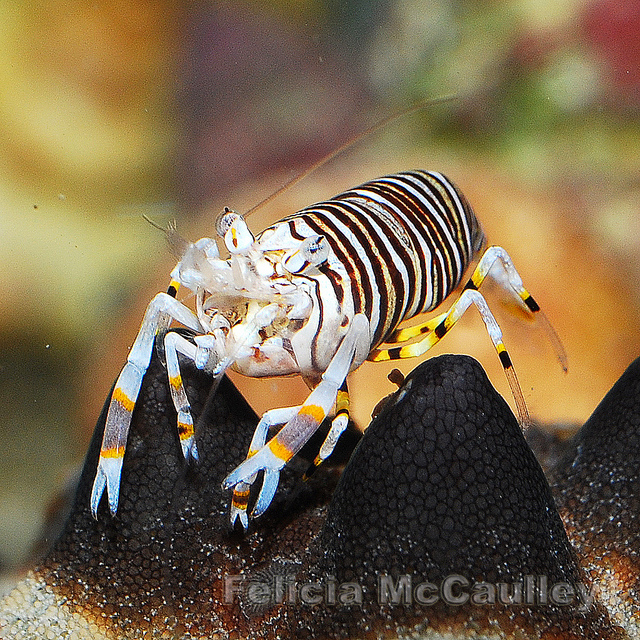 Despite having such a monumental list of tasks at LiveAquaria, none of which Felicia complained about (to us anyways), she also had a long list of accomplishments. One of the things she says she is most proud of is her design of a very safe and effective medication and dosage regimen for treating exophthalmia (bulging eye) and gas bubble disease in fish previously considered to be untreatable. In addition to that, Felicia was also instrumental in helping breed McCullochi clownfish (Amphiprion mccullochi) and raising the juveniles to salable size, which primarily occurred in 2010. Around that same time, her seahorses were breeding as well, and with Kevin’s help, she was able to raise approximately 300 seahorses. 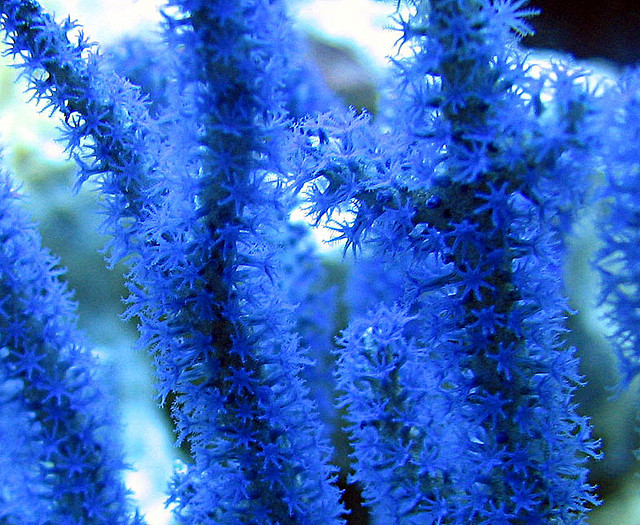 Like all good things, Felicia’s stay with LiveAquaria had to come to an end. In 2011, she moved to back to Pennsylvania, where she started working as the manager and internet marketing guru for The Hidden Reef in Levittown. Felicia’s stay at the local fish store proved to be fruitful, as she was able to breed and raise clingfish (Gobiesox punctulatus). Her clingfish experience was documented in a CORAL Magazine article, which was published in the Mar/Apr 2012 issue. After some time at The Hidden Reef, Felicia briefly worked at Russo’s Reef, a high-end marine ornamental wholesaler. Her duties there mirrored those at LiveAquaria, as Felicia served as the photographer and social media guru, but also included fish acclimation and feeding. 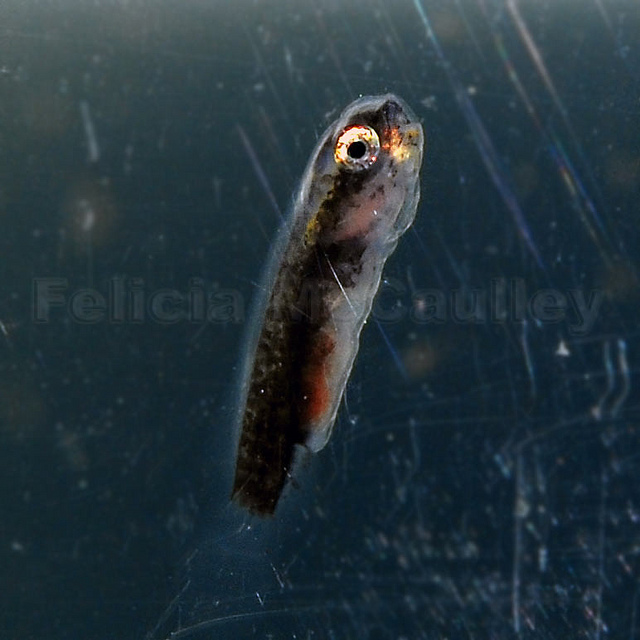 Felicia also spent some time  as the Vice President of Public Affairs and Vendor Relations for the North Central Pennsylvania Aquarium Reef Society (NCPARS) and even joined the Marine Aquarium Societies of North America (MASNA) as the Vendor Relations chairperson for a little while. Currently, Felicia works for Fish Factory in Bristol, Pennsylvania and runs a side aquarium photography business for individuals or businesses looking to utilize her skills. She has even been commissioned to take photos of particular species or diseases for magazines, internet, or books. In her spare time, what little of it she seems to have, Felicia writes for how own blog, Aquarium Adventures which she started in January 2009, and for Reeftools since December 2009. 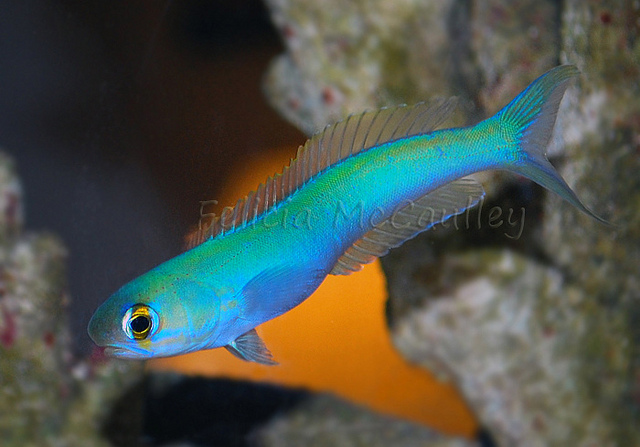 With Kevin Kohen’s encouragement, Felicia started speaking to aquarium clubs about aquarium photography and seahorses in 2010. To date, she has spoken for the Northern Wisconsin Reef Society, Delaware Valley Reef Club, Greater City Aquarium Society, and the Bucks County Aquarium Society. Her upcoming speaking events include the Dallas Fort Worth Marine Aquarium Society and another trip to the Greater City Aquarium Society. In addition to the CORAL magazine clingfish article, Felicia also has several magazines and books in which her photos have been published, including Marine Fish & Reef USA 2012 and Aquarium Fish International, May 2012. She also has a photo in a not-yet-published college microbiology textbook, several children’s books, and several guppy and seahorse books, which are mostly overseas. 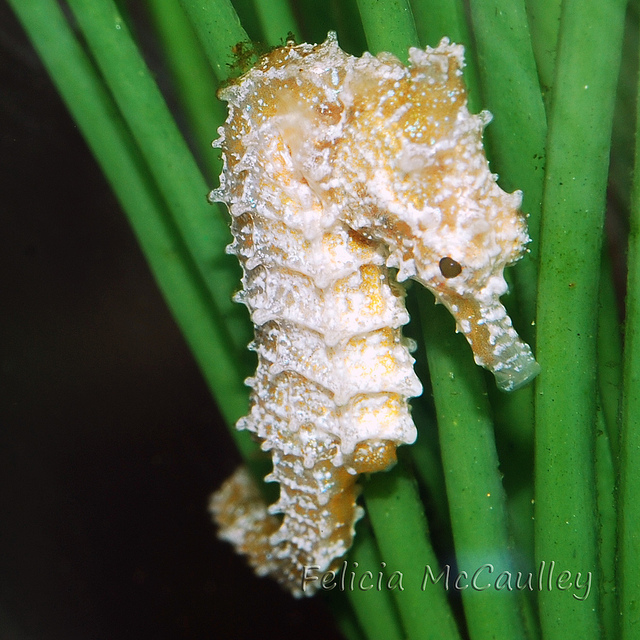 We’d like to thank Felicia for taking the time to shed a little light on her illustrious career in the marine aquarium hobby. Obviously she’s quite accomplished and we expect many great things from her in the coming years. 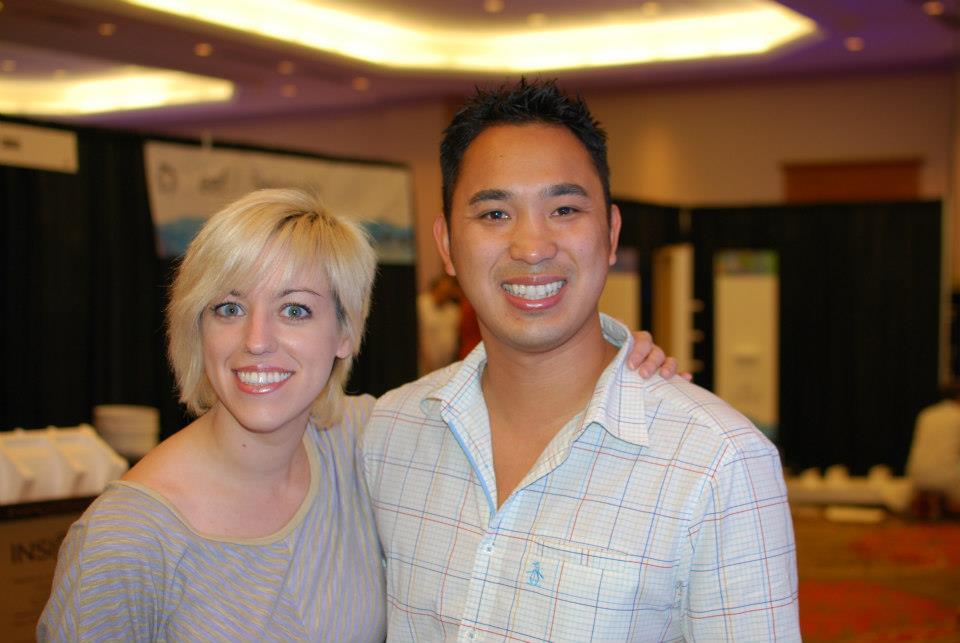 Felicia McCaulley with The Fish Geek himself, Francis Yupango 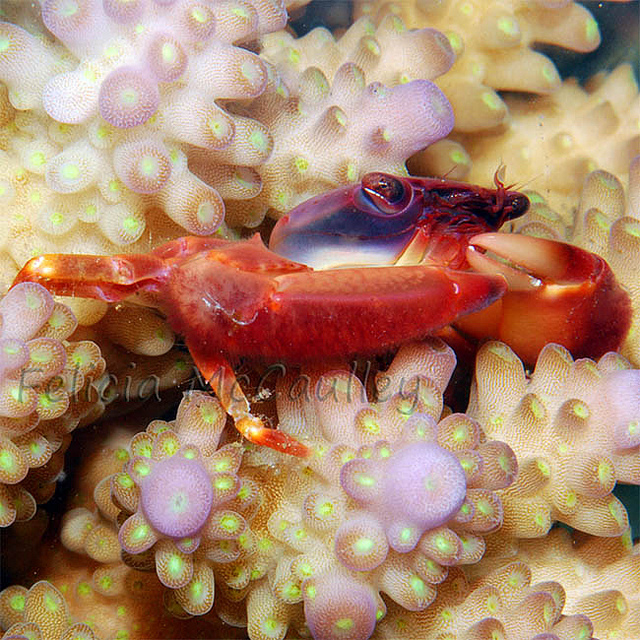