Trending
You are at:Home»General»Michigan Pet Store Without Water or Power Shut Down for Deplorable Conditions 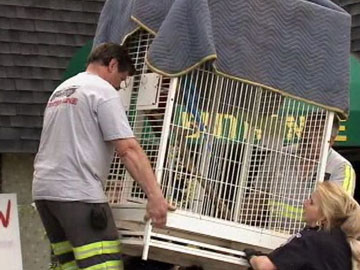 Greenwood Pets and Plants, a Michigan-based pet store that has been around for more than 30 years, was shut down yesterday when officials happened upon deplorable conditions brought on by a lack of water or power. Officials removed nearly 100 animals from the store, including cats, dogs, birds, and all of the usual pet store residents. The fish, on the other hand, were left at the store temporarily, as there was probably no safe place to put them. The store’s owner, Dennis Jones, was found hiding in the basement and had to be carried out on a stretcher, the whole time screaming that it was the mayor’s fault.

As the story progresses, we find out that the owner was more than $9000 behind on his water bill, and therefore had his utilities shut off. Addtionally, the store also doubled as his residence. Jones was pulled out of the store/residence and taken to a nearby hospital to be treated for a previous injury. Officials temporarily restored power to the store in order to make sure they found and removed all of the animals, some of which were even in the attic.

Regarding the fish, as of 10pm last night, they were still at the pet store. Because fish require large volumes of water and proper equipment to survive, they present a logistical nightmare for law enforcement officials and would probably have a better chance where they’re at. This isn’t the first time law enforcement has left fish at a run down store they were in the middle of shutting down, so it’s no surprise that they were treated this way in this case as well.

For information on this story, be sure to visit MyFOX Detroit. Story found on Facebook via Tal Sweet.