Trending
You are at:Home»General»Vandals Dump Copper Powder into Reef Aquariums at Aquariums Wholesale 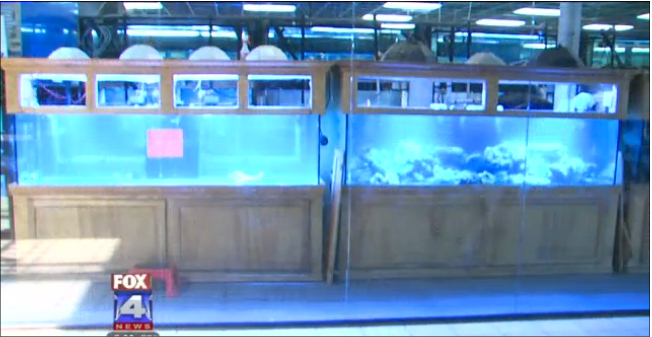 Two of the copper poisoned aquariums at Aquariums Wholesale

Here’s a terrible story for aquarium lovers. According to a Fox 4 News Kansas City, on Sunday evening or sometime early Monday, vandals are believed to have dumped copper powder into four display reef tanks at Aquariums Wholesale, located in Olathe, Kansas. As any marine aquarist knows, copper is deadly to invertebrates and corals, and that’s exactly what happened. The corals died en masse, fouling up the water and overwhelming the filtration system, which led to the deaths of hundreds of fish as well. Up to 1,000 corals died in the vandalism, and the financial blow is said to exceed $20,000. Employees of Aquariums Wholesale believe the attack came from a local competitor or unhappy customers, and that it was a deliberate attempt to force them out of business.

The store will bounce back from this, according to employees, but the attack comes at a particularly bad time because Aquariums Wholesale was in the process of firing up their online business, which will no doubt be severely impacted because of this. Fortunately, not all of the tanks were affected, and the store will be able to still operate. While the story hinted that it would take weeks to clean the tanks and rocks before they could be used, we would hope that all of that stuff would be discarded and replaced with setups that haven’t seen any copper. Any aquarist worth his weight in salt knows that copper can leach out of rocks and equipment to have a lasting impact on any new livestock.

No arrests have been made, and Aquariums Wholesale is offering a $1,000 reward for information that leads to the arrest of anyone responsible for the vandalism.