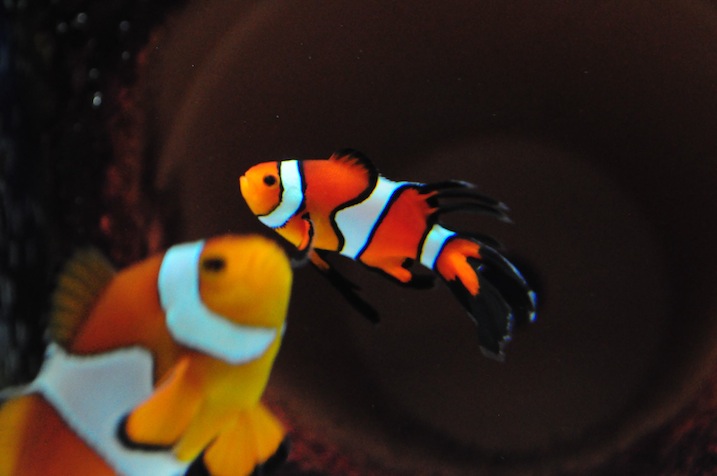 Clownfish come in a wide variety of shapes, sizes, and colors, but this one is way out there. Recently on their Facebook page, Sustainable Aquatics shared an image of this very unique looking clownfish. The tiny Ocellaris has the typical orange, white, and black coloration, but it also possesses elaborate fins that would look more fitting on a betta fish.

This crazy looking clownfish is the resulting offspring of two rather normal looking fish. One of the regular SA clownfish pairs had been laying eggs for some time now, with an estimated total of 25,000 offspring having been hatched. Of this massive amount, only one fish has shown signs of the longfin mutation, and it is currently pictured above.

According to Sustainable Aquatics, a member of their staff found the odd looking clownfish with the unusually long fins, which was being harassed by its tankmates. Seeing just how unique the fish was, the staff member relocated the fish so that it could heal from all of its battle wounds. After all, clownfish can be very aggressive toward each other. After some time, the longfin clownfish was eventually paired with a wild-caught female Ocellaris. The hope obviously being that the longfin trait could be passed down to another generation and potentially blended with other clownfish aberrations to created a whole new genre of designer clown. There’s no telling if the mutation will be passed on, or just how much of it will be expressed if it is. But that’s not going to stop SA from trying.

Here’s where you, the hobbyists comes into play. Sustainable Aquatics wants to bring this unusual fish to the aquarium hobby marketplace, but before they do, the fish needs a name. Clownfish have been called everything under the sun in recent years, from Picasso and Snowflake clowns, to Platinum Perculas and Midnight Ocellaris. And those are just a few of the tamer names from the bunch. So, they are holding a naming contest. If Sustainable Aquatics is able to maintain the mutation and spread it around, they need good ideas on what to call the fish. The winner of this contest will receive a pair of the longfin clownfish in return, and before they are released to the rest of the aquarium keeping public.

Before we officially close, we will fully admit that we thought this fish was fake at first. Heck, even after Sustainable Aquatics addressed those claims, we still find it hard to believe. Our doubts are further deepened by the lack of a picture of the parent longfin clownfish. But, we’ll wait and see if any pranksters emerge, and until then, we don’t really have much reason to doubt the crew at Sustainable. That said, we’re curious what you guys think. Fake or real, let us know in the comments below.

UPDATE: We corrected a statement in the above article to better reflect the clownfish’s story.