Trending
You are at:Home»Aquarium Equipment»Yahoo’s “Awesome Aquariums” Article Full of So Much Fail it Hurts 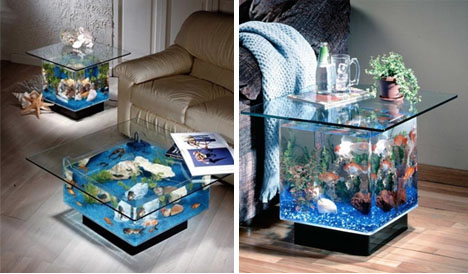 Cool, modern aquariums according to Yahoo

We get the fact that not everyone is an aquarium enthusiast, and even fewer dabble in the realm of marine tanks. But this latest article from Yahoo focusing on five “cool” modern fish tanks just goes to show how out of touch the outside world (or at least the Yahoo writing staff) really is. They recently posted an article called “Awesome Aquariums: 5 Cool Modern Fish Tank Designs” which popped up in the newsfeed on their homepage the other day, and because we’re always on the hunt for anything aquarium related, we couldn’t resist seeing what they had to say. Would the article cover some over the top aquarium installs of the rich and famous? How about some elaborate reef aquarium that is worthy of praise from hobbyists all over the globe? The answer to both those questions is a big fat no. Instead of focusing on anything close to being awesome, Yahoo chose to instead highlight coffee table aquariums, those ultra narrow ceiling mounted tanks, a setup that looks more fitting for a group of hamsters, and the always classy built-in sink aquarium. Hell, why didn’t they include the toilet aquariums too?

While we realize that our tastes don’t always line up with those of others, to say that any of these tanks are modern shows a level of ignorance that is unrivaled. Coffee tank aquariums have been around for decades, and from the looks of it, they haven’t changed a bit. Most of the other aquariums on the list fall right in line with that timeframe as well. In fact, the only tank in the bunch that can be considered “modern” is the ceiling mounted aquariums, and even those have been around for several years.

Seeing the blatant ignorance in this article, we could have just gotten a little upset and moved on, probably focusing our time and energy on something more meaningful. But, we decided to take the opportunity to address the ignorance, if nothing more than to tell people that this isn’t what we consider modern or even acceptable for that matter. These aquariums suck, and we’d purposefully blow our dough on Aiptasia anemones before we’d set one of these up.