Trending
You are at:Home»Aquarium Equipment»Be Careful, Otherwise Your Spouse Will Hock Your Aquarium for Cheap 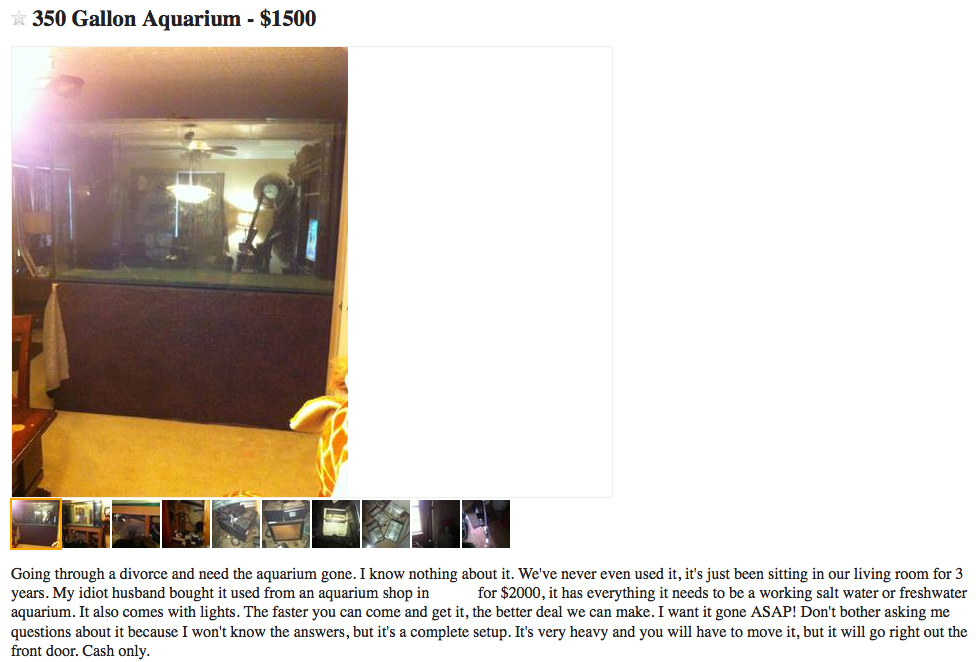 Through the years, we’ve heard story after story of guys coming home to find that their wives had done something drastic out of revenge for the husband having done something incredibly stupid. Usually, however, these stories center around wives giving away golf clubs, breaking a television, or something far less dangerous than messing with a fish tank. But that’s exactly what we found while perusing Craigslist for a good deal on an aquarium. In this comical listing, a wife posted her ex-husband’s 350-gallon tank for sale, referring to him as an idiot and selling the tank for quite a bit less than what it paid for although it was never set up. The ex-wife seems so eager to move the aquarium that she’s willing to wheel and deal just to get it out. Man, what that guy must have done. Scares me.

All kidding aside, this is a far too common occurrence in the aquarium hobby. That said, this instance is far more timid than some of the extreme situations that we’ve seen. We’ve heard stories of wives breaking gear out of anger and even dumping bleach or some other harmful substance into an aquarium out of spite. In any case, we honestly couldn’t tell you what would be worse…to come home to a shattered aquarium or to come home to a totally nuked tank. At least with a nuked tank, you can recover and rebuild. If the tank is destroyed, then your livestock is probably dead anyways, and you’re left without a tank or potentially other equipment.

So, moral to the story, don’t piss off your wife/ex-wife/girlfriend/whoever is in possession of your aquarium…be it running or otherwise.