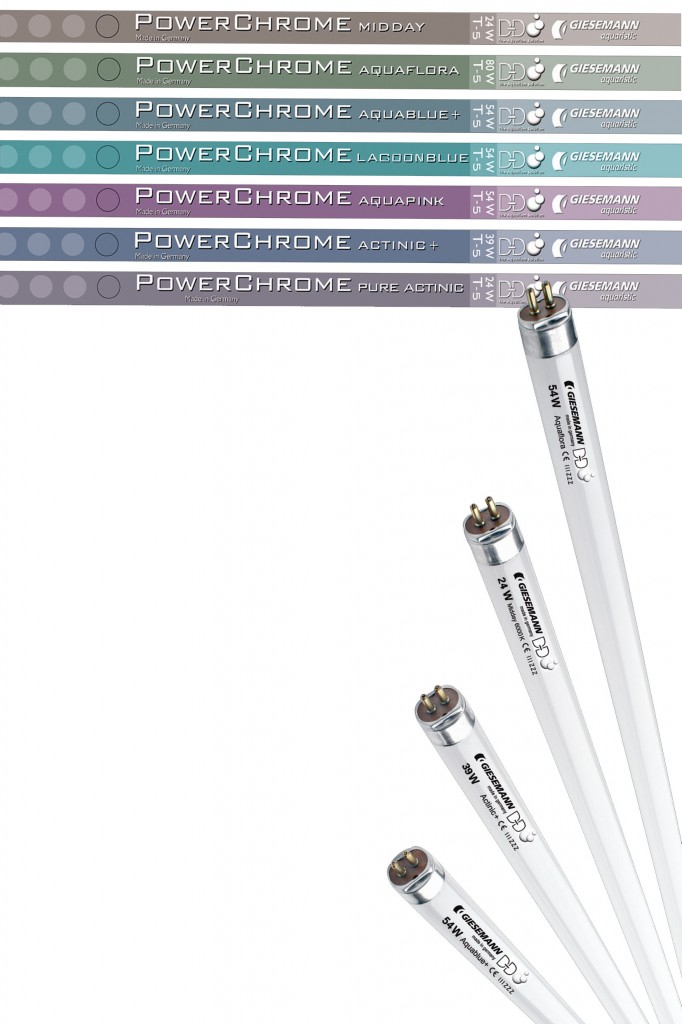 About a week ago, we helped announce Giesemann’s new line of Powerchrome T5HO tubes thinking it was a simple refresher to the uber popular line of D-D Giesemann Powerchrome T5HO tubes that have been around for ages. Unfortunately, there has been a lot of industry-wide confusion regarding the situation, prompting D-D Aquarium Solutions to make a statement indicating that these new tubes are actually not created under the joint efforts of D-D and Giesemann, but represent Giesemann’s efforts to go their own way. The D-D announcement is laid out in a Q&A style format with a moderately detailed history of the partnership capping it off.

To sum up the history lesson, D-D Aquarium Solutions developed a T5HO tube with a 5-point spectrum back in 2002. Recognizing just how good the lamps were, Giesemann Lighting sought out a partnership with D-D to supply them lamps, and an agreement was made that resulted in the D-D/Giesmann Powerchrome. Development to the tubes continued over the years, and the lamps saw a ton of success. As a side effect, however, the success of D-D’s distribution efforts locked Giesemann out of being able to distribute the lamps themselves in many major markets, like America. So, Giesemann made the decision to develop their own version of the Powerchrome, which do not share the same legendary spectra that belong to D-D.

The parting of ways has yielded the Giesemann Powerchrome tubes, which do not at all carry the D-D name in any way shape or form. That said, the Powerchrome name stays on the package, and many of the color offerings are similarly named. This undoubtedly will result in across-the-board confusion, as aquarists looking to replace their existing D-D/Giessmann lamps will now be met with another product that looks almost identical. Fortunately, at least for fanboys of the original offering of Powerchrome tubes, the D-D/Giesemann Powerchromes will still be offered as they currently are.

So, extremely confusing story and we’re not entirely sure how it will all play out.

D-D T5 Tube announcement Q&A
Q 1 – I have read that there will be a new T5 tube introduced by Giesemann, I am confused, does this mean that the existing T5 tubes that I have successfully used on my tank for many years will be no longer available?
A – No, the D-D tube that people know as the D-D / Giesemann Powerchrome will continue to be available for all existing and future markets through the same D-D distribution networks that they are currently supplied through.
Q2 – Are these the same bulbs?
A – The D-D joint branded T5 bulbs, which were first introduced in 2002 as the first blended phosphor, 5-point spectrum tubes in the hobby have spectra that are unique and exclusive to the D-D brand and by agreement cannot be duplicated.

Q3 – Are the Giesemann own brand bulbs new and therefore better?
A – The D-D tube has always been at the leading edge of T5 development. Our tubes incorporate the very latest in phosphor technology for output, lifespan and colour stability and also meet the latest in environmental standards. The tubes have been continually improved for over 12 years, but more importantly have a proven track record over that time on tens of thousands of aquariums.

Q4 – if they are not the same bulbs then why does Giesemann plan to launch a new brand?A – Agreements set out when Giesemann added their name to our existing D-D tube range in 2005 have prevented them from distributing directly in certain countries, most notably the U.S. market. Giesemann has decided to generate revenue by changing this agreement through the introduction of a different product line.
The success of this move will for them will depend on the quality and spectral output of the new bulbs and how the hobby, especially those who are unaware that it is in fact a different product, accepts them.

Q5 – What is new in development for the future?
A –Improvements and new spectra are continually being developed to enhance the comprehensive seven colour range such as the latest lagoon blue tube, a stunning turquoise blue that simulates the colour of shallow water over clean white sand.

For full information on the history of our T5 tubes please follow this link
http://www.theaquariumsolution.com/d-d-t5-tubes-–-history-product

D-D T5 tubes – A history of the product
In 2002 D-D Aquarium Solutions were the very first in the world to develop a 5 point spectrum, blended phosphor T5 tube specifically for marine and reef aquariums. Before that time there were only white and blue tubes available to the hobbyist and colour blending relied on mixing these two distinct tubes together in various ratios.

This first special spectra was called ‘Aquablue’ with a 60:40 white:blue blend of phosphors and a 5 point spectrum which made it a global revolution in T5 fluorescent lighting for the hobby. Most T5 tubes at that time only had a 3 point spectrum as they were not developed for use in the aquarium industry.

In late 2005 an agreement was reached for D-D to supply our unique spectrum tubes to Giesemann Lighting in Germany who acknowledged that we had developed the best and widest range of T5 tubes available to them. An agreement was made to allow Giesemann to add their name with ours on the tubes and the D-D/Giesemann Powerchrome T5 tube was born.

Over the years D-D have continually improved the tubes as technology advanced and additional new colours have been introduced to the range until today D-D have one of the widest choices of T5 tubes of any company in the hobby with seven distinct spectra producing the highest possible output and meeting the latest standards for protection of the environment.

The success of the D-D network to distribute these joint branded T5 tubes globally has had the side effect of locking Giesemann out of being able to offer the tubes themselves in many major markets, including America.

Giesemann have now made a decision to go their own way and have started over the last few months to develop their own brand range of tubes without access to the exclusive spectra that belong to D-D.

In the short term D-D will continue supply our tubes in the existing joint branded packaging that people know and trust. There will no doubt be some confusion for the hobbyist whilst the spin-doctors do their work but be assured that the D-D tubes will continue to be available in all existing worldwide markets and will always be at the forefront of the latest technical developments.

In conclusion, we can create hype by describing our tubes as being “exclusive, incorporating new advances in Tri and Penta-phosphor blending to improve high output performance which increases the life span of the bulbs, producing better coloration and greater spectral stability”, which by the way they are, and have been “specifically developed for use in all dimmable units” which was a standard that we set way back in 2002.

Alternatively we could simply suggest that you ask one of the many thousands of aquarists who have used and continue to use our tubes on their aquariums and let them tell you.