Trending
You are at:Home»General»What Could Possibly Eat a Great White Shark? 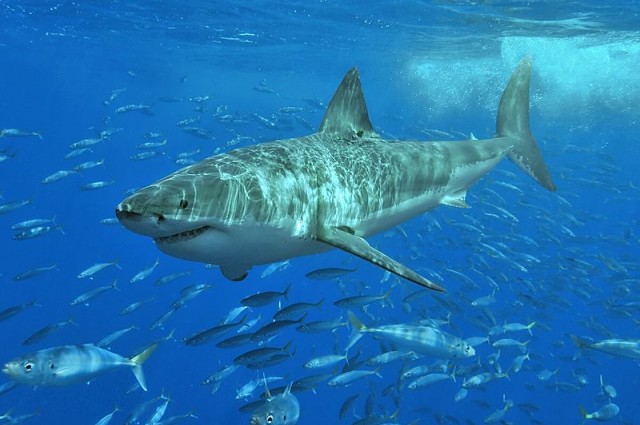 The great white shark undoubtedly holds the top spot for the most recognizable predator in the ocean. This beautiful creature grows to lengths greater than 20-feet when mature and there is little in the ocean that could go toe-to-toe with one. Apparently, however, these formidable predators aren’t excluded from becoming prey, even for individuals as large a 9-feet in length.

According to multiple news stories, Australian researchers had tagged a female shark during a routine tagging expedition. Approximately four months later, the tag inexplicably washed ashore on an Australian beach roughly 2.5 miles from where it was attached. The researchers retrieved the tag and started to analyze its data, revealing some strange information that lead them to believe the shark was killed and possibly eaten. The information showed that the tagging device dove rapidly to a depth of 580 meters, but at the same time the temperature readings rose from 46 degrees F to 78 degrees F, consistent with the internal temperatures of, say, a stomach. The temperature stayed elevated for a total of 8 days, before the tag was excreted and set adrift.

As for what could eat a 9-foot long great white, it was speculated that a giant squid or an orca were to blame, but now researches are saying that it was a much larger great white. By examining studies on migrating large white sharks, the research team came to the conclusion that another great white shark that likely exceeded 16-feet long and weighed greater than two tons likely attacked the smaller great white. It’s unclear whether the attack was territorial aggression or a case of extreme cannibalism, and it’s obviously unclear if the shark was consumed entirely or just torn to shreds a little at a time. Regardless, the finding is extremely interesting and makes researchers look at the relationships between great whites in a different way.