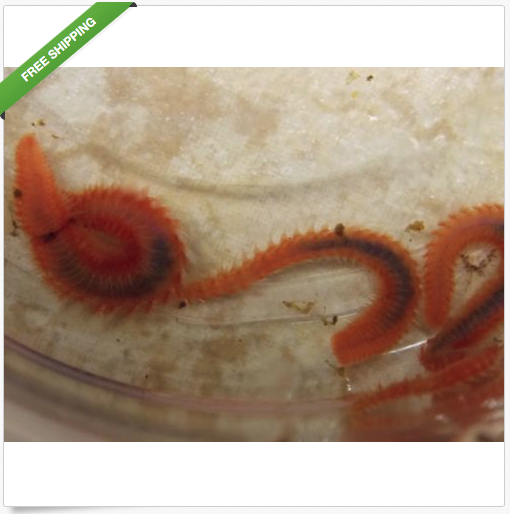 The world of online auction sites like eBay allows anyone, anywhere, to buy just about anything. Sometimes you can find incredibly useful items, products that complete a collection, or just some random and weird stuff from sellers looking to make a little extra scratch. In the aquarium community, we usually see coral frags and random supplies, but we’ve also seen $500 Ultra LE Aiptasia anemones and now someone has a listing for bristle worms. While the aiptasia listing was downright predatory in every sense of the word, the appearance of bristleworms is borderline, for us anyways.

On one hand, you’ve got an animal that consumes detritus in the marine aquarium and can actually be beneficial. On the other, you’ve got an invertebrate that is incredibly common and can even be somewhat of a nuisance if their numbers get too high. Regardless, let’s get back to the actual listing.

The seller has (or had) a total of 11 packs of 10 worms for sale, of which four have already been sold. The 10-packs of bristleworms are $20 per, which means the seller has already made $80 off selling them. That said, the polychaetes do come with free shipping, which obviously eats into the overall profits.

This listing, as well as a few others that have raised eyebrows, leaves us asking the question…Should aquarists be selling something that is so common as bristleworms? Would it matter if the organism was nothing but beneficial?

I’ve always been a big believer in “paying if forward”, an act in which I give things like macroalgae, amphipods, and other beneficial critters away for free to hobbyists in need with no need for reciprocation. Obviously, not everyone is a believer in that train of thought,  but it still plays to the question as to whether or not people should charge money for stuff like this.