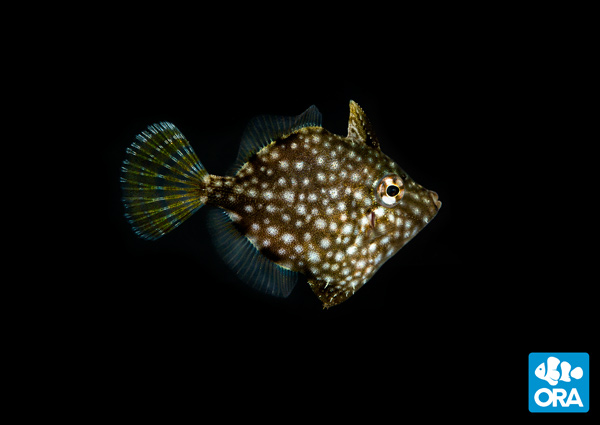 The crew at Oceans Reefs & Aquariums threw down some pretty awesome news over the weekend, announcing their latest captive bred fish, the ORA Whitespotted Pygmy Filefish. The filefish may not seem like an immediate choice for the ranks of the captive bred, but these fish are completely awesome and have been growing in popularity in the aquarium hobby over the past several years. In terms of coolness factor, there are few fish out there that rival the filefish. They look unique, they move differently, they respond to an aquarist’s presence with a sense of intelligence, and they can even change their color. Oh yeah, they’re pretty tiny, too. As their name suggests, this filefish stays quite small, reaching a maximum length of just 3 inches, making them a great choice for aquariums of all shapes and sizes. Really, these are just amazing little fish and we’re excited to see them achieve captive bred status.

For ORA, this particular species of filefish (Rudarius ercodes) is found in the temperate waters of Japan and Taiwan, and because of this, some difficulties were expected in the breeding process. To their surprise, however, the fish was relatively easy to rear, as broodstock settled quickly, took to a variety of prepared foods, and seemed to recognize an aquarist’s presence to a much greater extent than other fish they worked with. The ORA staffers were able to house small groups of these filefish in reef tanks with no noted coral nipping, suggesting their possible status as being reef safe. Of course, that label is never a guarantee, as we’ve noted numerous reef safe species turning into coral chompers.