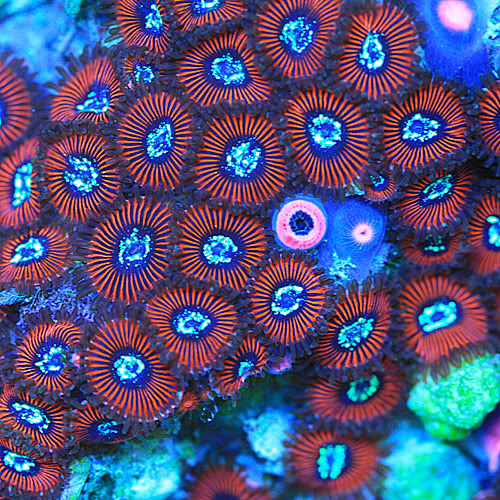 Our Featured Coral of the Week is Red, White(ish) and Blue.  Independence Day is almost here and I thought it would be appropriate to feature a coral ahead of the holiday that has our flags colors in it.  Sometimes referred to by collectors and hobbyists as Firecracker zoanthids or Polish Princes, we really like this Zoa and are curious if any of our readers have this in their zoa collection.

Zoanthids are an order of cnidarians called Zoantharia. Commonly seen in shallow coral reefs and at greater depths in several of the worlds oceans and seas.  These coralmorps or false corals are sometimes called soft corals which in actuality is a misnomer.  They are seen in a variety of different colonizing formations and they are available in numerous colors.  Found as individual polyps or as a carpet of connected polyps they attach themselves to sand, rock other hard substrates and sometimes other invertebrates.

They are among the most commonly collected coral in reef aquaria, easily propagating and being very durable in many water conditions.  Use special care when handling zoanthids or palythoa cnidarians.  These animals contain palytoxin which can be deadly.

Although most fish typically avoid zoanthids as a food source, the Matted Filefish (Acreichthys tomentosus) has been known to eat zoanthids in the aquarium.  Box snails, Heliacus spp., feed specifically on zoanthids and should be removed right away if you wish to have success growing these animals.  Another predator to look out for are the zoanthid eating nudibranches.  These animals are hard to see sometimes because they take on the appearance and coloration of the polyps they are feeding on.  When adding new corals to your tank it is always advisable to use a good coral dip, keeping in mind that most dips will only dispatch the adults.  If eggs are present you may expect to see more nudibranche in your tank in short order.  Zoanthid eating spiders pose another threat as described by Meleve’s Reef in this article. 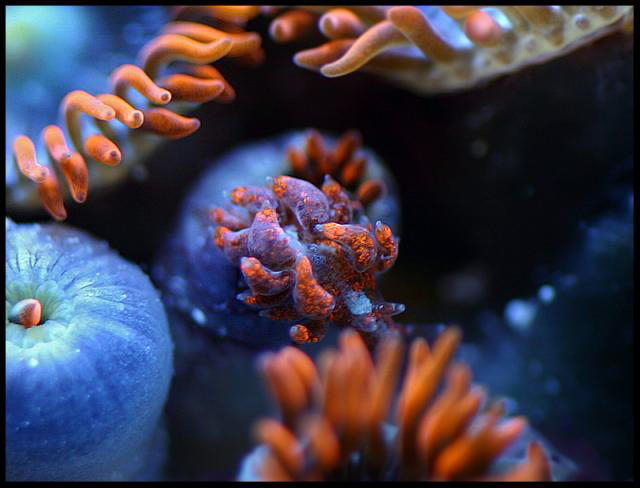