I believe that Tuesday should be the favorite day of the week after Friday. Why, do you ask?  Because, Tacos. Who doesn’t like Tacos? This year on National Taco Day I made a soft shrimp taco. I thought you might like to have the recipe. 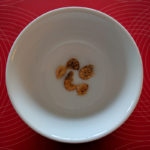 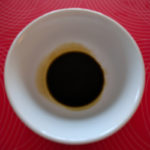 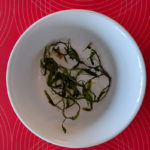 Serve immediately, without the taco.

This delicious treat is sure to make almost any fish happy. My One Spot Foxface enjoyed the Caulerpa. My Yellow Tang also took a few nibbles. Mysis is a favorite food and was devoured quickly by all. My Golden Rhomboid Wrasse made a valiant attempt to eat the Krill but Krill needs to be soaked for a while before fish can tear off any bits.

If the recipe sounds delicious, you can adapt it for yourself very easily.

There are other Caulerpa species you may try.  Lentillifera, for example, is actually quite edible (even for humans when drizzled with a little vinegar). Click here to learn more.

Red Ogo can be substituted for Caulerpa or added alongside. Also, edible for humans. It will add more color to the taco. Tangs will make a beeline for it.

Krill is popular in a capsule form called Krill Oil. The benefits of krill oil for humans is being challenged, some say it can cause cancer while others claim cardiovascular benefits. Krill is not chiefly used for human consumption, however it is a crustacean just like a shrimp and is consumed by people in some countries. Here in the US, Eon Coffee (http://www.eoncoffee.com/menu/sandwich-salad-wrap-soup.html) in Hayward, California has Krill on their menu. Served as a Spicy Omega-3 Crab Wrap, it sounds too delicious to pass up.

Phytoplankton is a microalgae. It is microscopic and packs a nutrient punch. Human consumption is said to benefit the liver, increase cell regeneration, create mood lifting and more.  I was skeptical until I learned that  Google has come up with recipes for smoothies and even mayo using phyto.

Calanus is also available in oil form. Benefits to humans include blood pressure and heart health.  Calanus are small copepods, part of zooplankton.  Zooplankton is abundant in the oceans and consists of many species of microscopic and very small animals.  Some human clinical trials (https://clinicaltrials.gov/ct2/show/NCT01193543)  have shown that calanus oil can reduce intra-abdominal fat.

Out of all the ingredients used in this recipe, mysis shrimp is likely the only one that is not adaptable for human consumption.  There is an easy fix for that – simply substitute with your favorite type of table shrimp.  Sautéed or grilled, served warm or chilled, your taco would not be complete without some shrimp.

Do you have a favorite Taco?